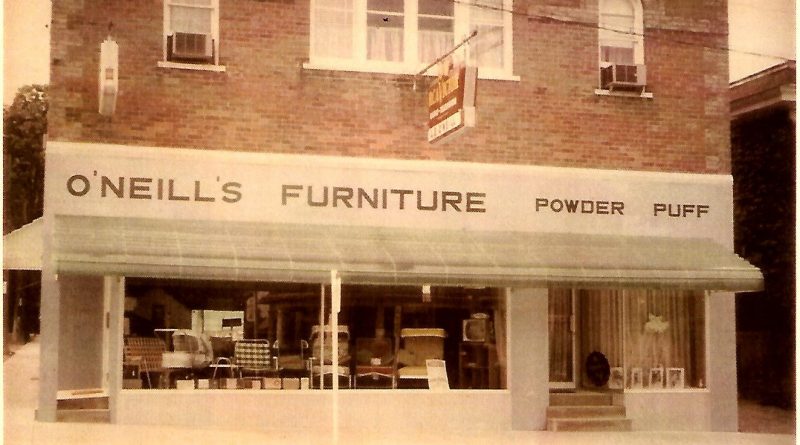 The corner of Church St. and Main has long been a spot for business in the heart of the Village of Stouffville. As early as 1826 the street was laid out in a survey done by David Gibson, Provincial Land Surveyor (PLS) who had been hired by Abraham Stouffer, Sr. The first seven village lots on the north side included this property.

Next in the timeline of development this property on the 1855 map by George McPhillips a building footprint is located very close to Main St. and also close to Church St. It was very tight to the corner.

Samuel Burkholder purchased the part of lot from Edward White in 1874. It was known as part “A” of Lot 14 Plan 70 and became a furniture store. We now know this place as O’Neill Funeral Home and is believed to have the longest history of a building used for a particular purpose in town. That is undertaking.

Samuel Burkholder was the son of Jacob Burkholder and Sarah (Sally) Barkey. He was the second oldest son in a family of 10. He was born May 3, 1836, on the farm, 102 acres just south of Lemonville. His older brother Jacob was a third generation Jacob Burkholder.

Jacob and Samuel were close and opened the furniture business together in 1876 in Stouffville Village. Their business happened to include undertaking as well. They had a store with two show rooms on Main St. and the second floor was utilized for storing choice and durable pieces made in modern and unique designs.

David Davenport operated a tonsorial, or barber parlour in the shop adjoining Burkholder’s furniture store. This was in the years 1880 to 1883.  The parlour was in the east side of the building. The “professor”, as he was known, and his family were highly respected citizens of Stouffville for a number of years.  Davenport sold his business to William Bovair who continued to do hair cutting.

Jacob Burkholder retired in October 1889 having spent thirteen years assisting his brother. Samuel bought him out and covered all outstanding debts. A few years later Nelson, son of Samuel, was brought on to assist with the running of the store.

The Burkholder’s sold the business to a Mr. W. J. Mather in 1917. Mather was noted as being one of the most competent embalmers that ever did business in this area. Mather eventually sold the business to Lisgar “Tim” E. O’Neill April 2, 1932. O’Neill had worked for him for three years learning the business. He was from Port Perry but was welcomed to the business fraternity here in the village.

O’Neill became the undertaker in the village but still sold furniture. He was a sportsman and was involved with baseball and was the manager for the Stouffville Clippers Championship team 1952. One of the player imports was a young man named Gordon “Polly” Minton who eventually took over the business with his wife Faye and gave up the furniture but kept the name O’Neill’s Funeral Home. This is a story of one of the original businesses in the downtown core.

Impacts of COVID-19 on businesses