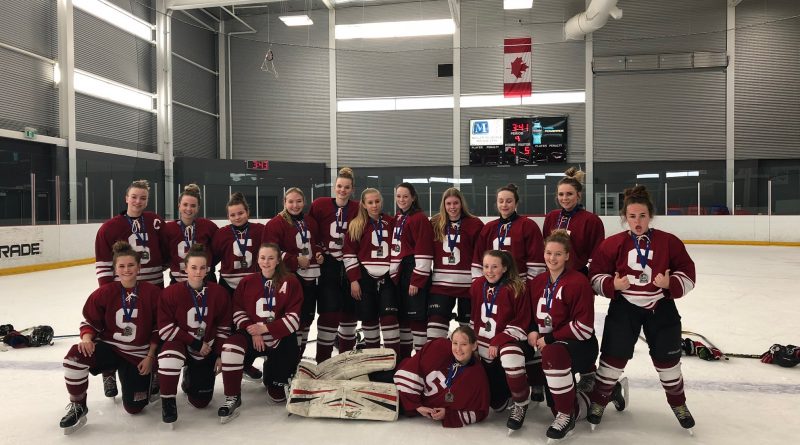 It was a big step forward for the Stouffville Spartans.

Unfortunately, the season ended with heartbreak.

The girls hockey team, which posted an 8-0-2 record in the regular season, went the distance against the St. Maximilian Kolbe Mustangs in a three-game final.

Despite some late heroics to tie Game 3 with 1.9 seconds remaining, the Spartans fell 5-4 to the Mustangs in overtime, narrowly missing out on the Tier 1 York Region Athletic Association (YRAA) and a trip to the provincial championship.

“It’s a good and bad feeling, knowing how close we were,” said Stouffville’s Alexa Feasby. “It didn’t turn out the way we wanted it to, but I’m proud of my girls. They were composed a bit better and played better as a team, but we put an effort in there for sure. It kind of sucks.”

Stouffville beat and tied St. Maximilian Kolbe during the regular season, and came out great to begin the series, posting a 5-2 win.

A stronger effort saw Stouffville push St. Maximilian Kolbe, which won a silver medal at OFSAA last year, to the brink, but it couldn’t finish the job.

“I thought they played great,” said Spartans coach Brian Shankman. “They came out in Game 3 like they did in Game 1. They came out hard and ready to play. We took the lead, but then we got a little scrambly there. If you win in overtime, it’s a ‘pick ’em’ by then.

“I think we had more depth than them, but they had some dominant players,” added Shankman of the defending champion Mustangs. “It could have been us, but it was them, and good for them.”

Shankman wanted his team to leave the rink with their heads held high.

“I told the girls after the game that they had nothing to be ashamed about,” Shankman said. “They’re disappointed, naturally, but that will happen. I feel bad for Feasby, and (Lindsay White), and (Abby) Roberts, because they won’t get a chance to go to OFSAA before they graduate, but they’ll realize, after a day or two, that it was anybody’s game.”

Considering the number of fresh new faces that arrived in Spartans colours at the beginning of the season, Feasby was impressed with what they were able to accomplish.

“I’m really proud of these girls,” Feasby said. “We had a new mix of girls this year and I had no idea where we were going to finish. Last year, there were only four teams (in Tier 1) so it was pretty much set who would be at the top and the bottom.

“This year, we led it the whole way and even though it wasn’t the outcome we wanted, we proved that we could compete.”

The experience for the younger players of getting into a YRAA finals should be a great benefit for Stouffville in the future.

“I think it’ll be a huge help,” Shankman said. “There’s an old adage in sports that you have to lose before you win. There’s no shortage of examples of that in professional sports. They were this close and they know that, and they’ll remember it.

“Hopefully, they can build on that and take it to the next level next time.”

While players like Feasby are moving on, they believe they’ve put the building blocks in place for the Spartans to take a run at a championship next year.

“I think the girls going forward are in good shape,” Feasby said. “There’s only four or five of us graduating, so the rest of the girls have a strong team going forward, and there are always girls coming in and bringing new energy.

“They could absolutely win it next year.”

Stephen Sweet photo – The Stouffville Spartans, who posted the best record in the regular season, finished second overall in the YRAA playoffs.