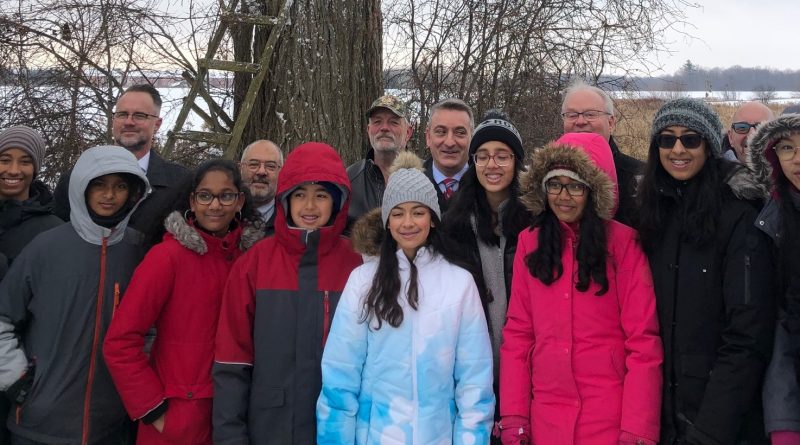 Dozens of students from two Stouffville schools are celebrating their success in petitioning the government to protect the largest and oldest tree in Stouffville.

MPP Paul Calandra and Stouffville Mayor Iain Lovatt visited the future site of the new Lincolnville GO Station November 15 to announce that Metrolinx will preserve the 200-year-old American Elm located on the property.

Rescuing the tree became a lesson in civics for students from Oscar Peterson Public School and St. Brigid’s Catholic school during November. When students learned the magnificent tree was being put at risk by the new GO Station, they launched campaigns asking that the tree be preserved.

“Metrolinx and the Town of Whitchurch-Stouffville have worked together to preserve this historic elm tree,” MPP Calandra said. “This tree is of significant historical and scientific research importance, and I am pleased to see that Metrolinx will redesign the GO station to incorporate the tree.”

About 20 students from Oscar Peterson attended the announcement event at the site of the tree with their teacher. When asked how it made them feel to know that their petition to government had been heard, Prisha Bhavsar responded “Important!” while Zoha Muhammad noted, “It made us feel like we had grown up from being children.”

“We are thrilled to have collaborated with Metrolinx on this important issue,” said Mayor Iain Lovatt. “By safeguarding this significant natural heritage feature, this landmark American Elm tree can be enjoyed for generations to come.”

Calandra congratulated the students and thanked them for bringing the tree to his attention; he also asked the students to stay involved with the project in the months ahead.

“I am asking that the new station be re-named ‘Stouffville Old Elm Station,’” he announced to the assembled guests, including staff from Metrolinx. “I will need you to express your support to Metrolinx for this name change – so don’t stop now!”

Metrolinx will work with the Town of Whitchurch-Stouffville to revise the plans for the new station to avoid risk to the tree. Construction on the new station is scheduled to begin this spring.

“It really helped us to ask for something and feel like we’re contributing,” said Shannon Chiong. “We actually have some voice in a decision made for the community.” 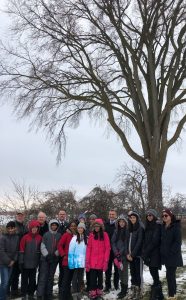 The Eco-Team from St. Brigid’s Catholic Elementary School collected almost 400 names on their petition, which they presented to Calandra on November 14.

“There are not a lot of elm trees left in Canada….we need to save this tree,” the petition read.

Claire Laviolette, member of the Environmental Stewardship Group for the Town of Stouffville, attended the announcement and was delighted with the news. “This is a very happy day…I’m so glad that everyone could work together and save this tree,” she said.

“This is a win,” declared Stouffville arborist Mark Carroll. “This tree is now going to wake up in the spring, and bloom for us and thrive. This is a win.”

Photo: Local students show their appreciation to local dignitaries for helping save the town’s oldest tree.