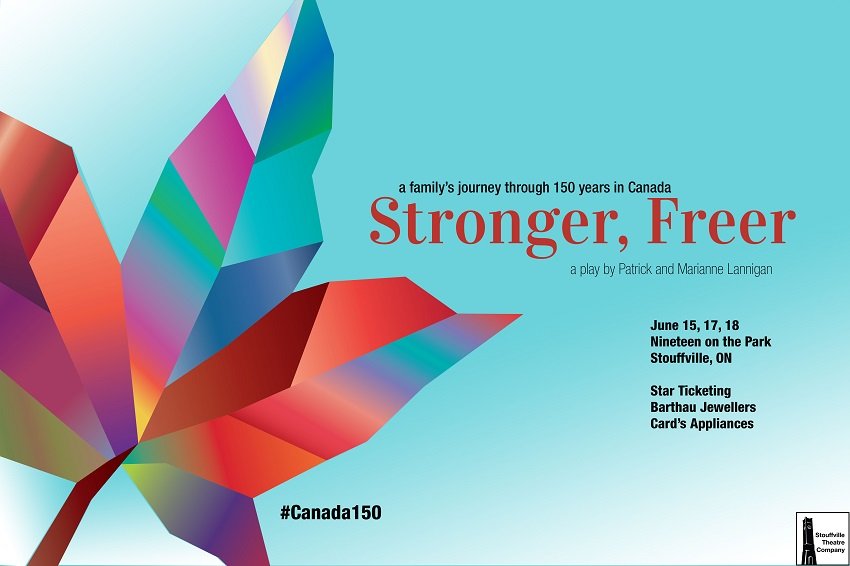 Stouffville Theatre Company presents Stronger, Freer which tells the story of a struggling Canadian family over the course of 150 years from Confederation through to present day. The performance hits the 19 on the Park stage June 15, 17 and 18.
The performance begins when the Robertsons arrive in Canada at the birth of our nation. Settling in PEI, from Scotland, they’ve pinned their hopes on the booming wooden ship industry as a way to fund Jonathan’s return to school. And suddenly those jobs disappear. Disrupted by the steel ships.
In Act 2, half a century later we catch up with them in Truro, Nova Scotia, and WWl is the stage where Canada defines itself as its own nation, strong and free. But the war has far-reaching effects—the Robertsons, and Halifax, will never be the same.
During Act 3, the Toronto Maple Leafs win the cup in 1967. Yes, the Leafs won the cup! Happy times. A way to prosperity. But Trudeau’s new criminal code bill pits family members against each other. An all-out father daughter war.
The final act represents the present day. Financially stronger than ever, in 2017, a new threat emerges that money alone can’t heal.
You won’t want to miss how this ends. Shows start at 8pm. Visit www.nineteenonthepark.com for details.