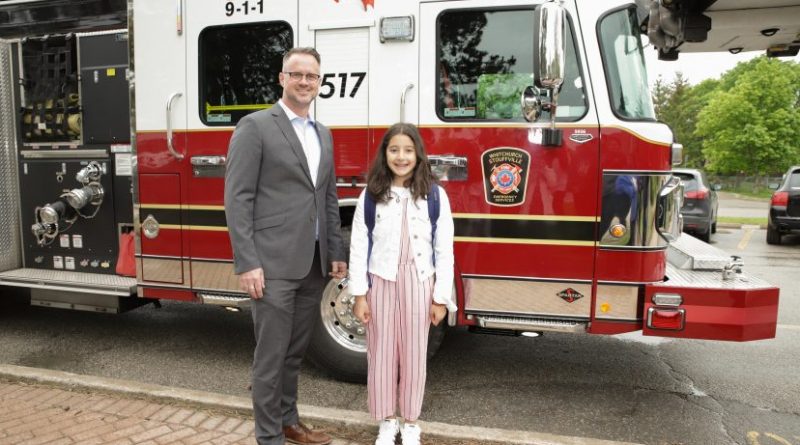 Stouffville has a new mayor.

Okay, it’s kind of a co-mayor for a day, but it will serve to keep Mayor Iain Lovatt on his toes as his office announced the winner of the first ever Mayor for the Day contest in Whitchurch-Stouffville.

Gabriella Bonanno was “sworn in” at the June 4 council meeting.

Soon to turn 12, Mayor Bonanno was picked up from St. Mark Catholic Elementary School where she was surrounded by all of her schoolmates as they clapped her out of the school and into the awaiting fire truck.

From there, Mayor Iain Lovatt escorted her on several tours of town facilities including the Operations Centre, Fire Station 51, the Leisure Centre and Town Hall. Following dinner in the Mayor’s office, Bonanno ended her term as mayor by opening the 7 p.m. council meeting while sitting in the Mayor’s chair.

“One of the reasons why we launched this contest was to increase civic engagement with our youth,” Lovatt said. “The submissions we received certainly demonstrated an impressive understanding of local governance as well as an overwhelming sense of pride in our community.”

“We were blown away by the quality of all of the submissions, Gabriella’s really stood out not only because of her ideas and plea for more females in politics but also because of how eloquently she articulated herself.”

“Being Mayor for the day was such an amazing experience!” Bonanno said following her day as mayor. “It showed me what a true leader does, I loved it so much that maybe one day I will run for mayor.”

Open to Whitchurch-Stouffville students in grades 5-7, the Mayor for the Day contest launched in early May gave students an opportunity to share their ideas of how to make Whitchurch-Stouffville an even better place to live.  Applicants were invited to submit either an essay or a three-minute video, which was adjudicated by a selection committee consisting of the town’s councillors.