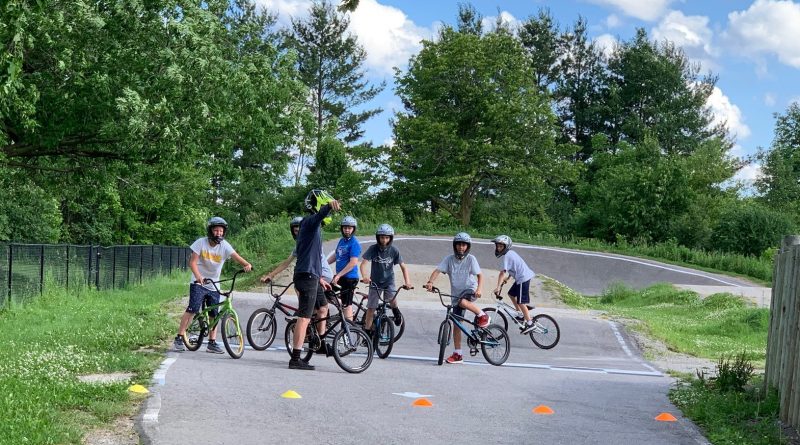 Brendan Arnold, an NCCP Level 3 Certified BMX coach, has been involved in cycling for over 25 years.

He has successfully competed on both national and international stages, including finals at world cup events and earning podium spots at national races.

Arnold was instrumental in developing and leading the High-Performance BMX program in Ontario. He has also recently developed a talent program called Rising Stars, that will identify talented junior athletes and develop them into future high-performance athletes. He has also worked with some of the best coaches in the world including current National Team coaches for Great Britain, Australia, New Zealand and Canada.

So why does all that matter?

Well, for local BMX enthusiasts, it’s a chance to have fun and get tips from one of the best coaches who also lives in Stouffville with his family. Arnold is behind the BMX park located in Bruce’s Mill Conservation Area (BMCA) on a piece of land donated to the town by the TRCA (Toronto Conservation Authority) in 2014. It is used by SBMX as part of the partnership with the town.

“I raced bikes professionally in the U.S.,” Arnold said. “And then I met my wife when I was doing that, and she lived in Canada, so I moved to Canada…I have three kids. They’re all very active in all sorts of sports, but a couple of them do this (BMX) with me.”

He says that Stouffville BMX has been here for five years, and “we’ve got great support from the town and from our local community.”

The track has also been fortunate to host several large scale races including the 2018 Ontario BMX Provincial Finals and the 2019 North American Gold Cup series qualifier plus the first Provincial qualifier race of the 2019 series.

For Arnold, the love of biking started young. Perhaps this is why he is focused on helping kids with their growth. It’s certainly not about money. In fact, his work at SBMX is a volunteer gig.

“My dad was involved with the sport (BMX in Australia), and that’s what got me in at age five,” he said. “If I have a chance to give back, I will and obviously, not everything I do in the sport is volunteer, but this job (SBMX), this is all volunteer.”

Arnold’s father was a huge inspiration for him.

“He ran a track like this (Stouffville BMX) in Australia, and then he ended up, it’s funny, he ended up not just running a local track, but he went on to run the whole country (program). And that was still volunteer. He just had a passion for the sport. He took a lot from building something that kids could get into and that they could succeed at.”

The interest for BMX continues to grow now that it is an Olympic sport.

“It’s a sport that’s different, now that it’s an Olympic sport, so it’s obviously growing on people around the world,” Arnold said. “But it’s not something that people think about when they think about sport—you think about baseball and hockey and soccer and stuff, but there are kids out there that obviously like to learn to ride to get better and like individual things and this is very individual.”

He says riding is relatively affordable compared to other sports. And having a facility like this is a bonus because they rent bikes and helmets for a nominal rental fee so kids (and their parents) can try it to see if they like it before investing in a BMX bike. Rental fees and program fees are kept low thanks to a partnership with Tiny Seedlings and various in-kind donations from other local businesses.

Participants pay $65 for the year and then $5 for a practice session and $10 for each race.

SBMX has race nights on Wednesdays with about 40-50 riders of various ages and levels participating, and Mondays is open practice night. Learn to BMX is slated for Mondays with the current session fully booked, but the organizers hope to offer another session later in the season.

This year the season lasts until the end of September and in addition to days and times noted above which are supervised, SBMX is also open on when Bruce’s Mill is open and the admission to the park permits people to enjoy a ride. Opening hours are also dependent on track conditions and weather as the club organizers focus on rider safety as well as preserving the integrity of the track surface.

The membership is growing annually and the team, which is made up of a core group of volunteers of riders and families of SBMX, welcome all new riders. First time riders can use a free “give it a try” one day/one use pass. The pass includes helmet and bike rental on the initial visit as well. It is a full family participation sport where kids and their parents can ride and experience BMX together.