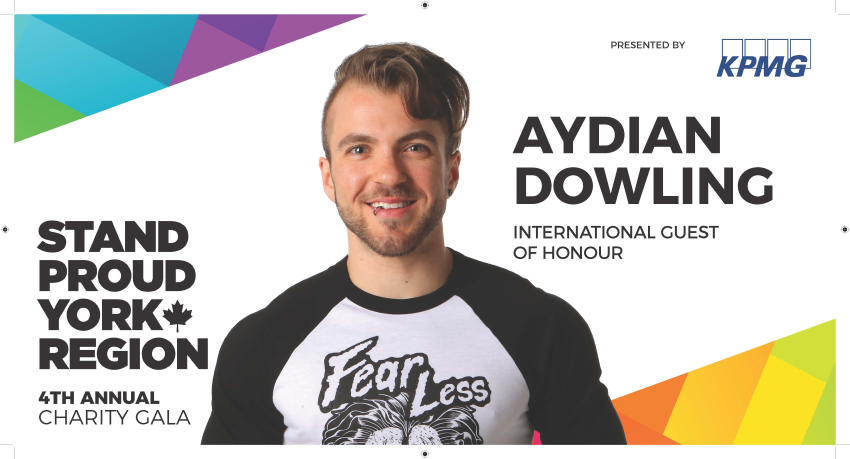 This promises to be the most colourful celebration of the year, directly benefiting the LGBTQ community and those with questions or concerns about sexual orientation or gender identity and expression. Funds raised help Pflag continue to provide vital services to the community, and to be there for those in need when it seems no one else is.

This year, the party has been moved to the Crystal Fountain Event Venue (near Kennedy Rd. and 14th Ave.) to accommodate the extremely high demand for tickets, as last year’s event was sold out.

Pflag Canada York Region is proud to announce its international guest of honour and guest speaker, Aydian Dowling. Aydian is a Female-to-Male (FTM) transgender activist from Long Island, New York. Aydian is most well known for documenting his own transition from female to male on YouTube as a way to voice his thoughts, fears, and successes; as well as offer a support mechanism for others looking to transition. His YouTube channel ALionsFear quickly became popular and, to date, has over 350 videos, reaches over 43,000 followers, and has more than 4 million views. Not including his over 131,000 followers via his motivational Instagram page @ALionsFear.

“Pflag is honoured and beyond thrilled to have Aydian Dowling as our international guest of honour, guest speaker and OUTstanding Achievement – Inspiration Award recipient at the 4th Annual Stand Proud York Region Charity Gala on March 3,” said Pflag Canada York Region President Amanda Knegje. “Aydian is a real life super hero to so many worldwide and a genuine inspiration. His presence and excitement to be part of the most colourful celebration of the year will create life-long memories for members of the LGBTQ community and its allies in the GTA and beyond.”

Aydian Dowling has gained worldwide recognition as the lead contender in Men’s Health magazines’ search for the “Ultimate Men’s Health Guy” in 2015. Aydian, along with the other four finalists, were featured on the November 2015 Special Edition Men’s Health cover. He was the first transgender person to be on the cover of Men’s Health and break down stereotypes of what defines a man, as well as created tremendous visibility for the transgender community as a whole. Aydian is also the founder of Point 5cc, a stealth clothing company and the first of its kind, designed to highlight transgender commonalities and create a sense of pride. He is a beacon of hope for those in the trans community, the broader LGBTQ community, and their loved ones around the world.

Aydian – the 2016 Grand Marshall for the Toronto Pride Parade – will also be accepting Pflag Canada York Region’s 2017 OUTstanding Achievement – Inspiration Award at the event on March 3 in recognition of his outstanding contributions to the LGBTQ community.
“Pflag’s Stand Proud York Region Charity Gala is the GTA’s most colourful celebration of the year,” said Pflag Canada York Region Vice President and Gala Co-Chair Michael Blackburn. “This event brings together our vibrant and diverse community and celebrates the accomplishments of York Region’s LGBTQ community and its allies. On March 3, we stand proud, we stand loud and we stand together.”

Visit www.pflagyork.ca for details or to order tickets.