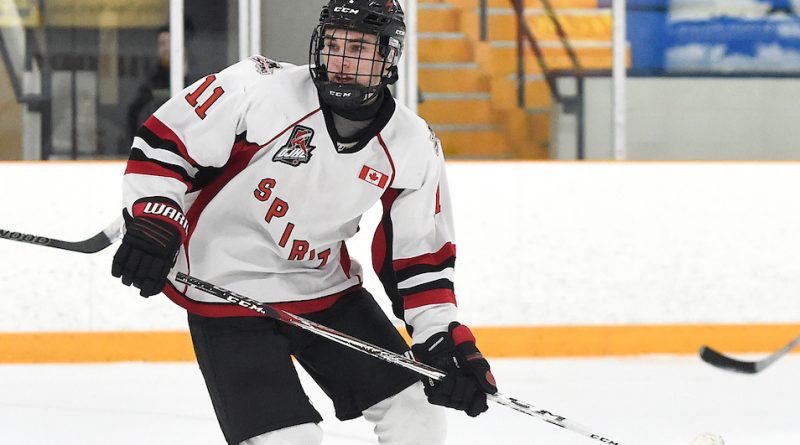 This was never going to be the season where the Stouffville Spirit made a deep run.

But it has provided a good first step towards becoming a top-notch team in the future.

As Stouffville’s season winds down, it has a chance to look at how the youthful squad has performed this year and how it sets up for the next one.

“The team’s in a rebuild, or whatever you want to call it, and we’re really young,” said Spirit general manager Ken Burrows. “Every player is eligible to come back next year, which we haven’t had in a few years. We have five rookie defencemen playing regularly every night, we have only one veteran defenceman, and two rookie goalies, so you’re going to have your issues, but that’s what you have to go through to have a good group of kids coming back.

“After that, you hope that you can take a run at it soon,” Burrows added. “We don’t lose anybody to age, although I think we’ll lose (Ian) Lemieux to Saginaw (of the OHL), but beyond that, I don’t know.”

While the young players have shown flashes of brilliance this season, consistency has been tough to attain for the Spirit.

“That’s what happens with the rookies,” Burrows said. “They play well for two games, and then they don’t for four. They’ve played a lot better the last month or so. We’ve just got to keep improving, and getting older, and that will happen next year.

“They need to spend a good summer in the gym to get themselves stronger,” Burrows added. “When you play the older teams, you can see the physical difference there.”

With rookies on every single line this year, there’s no shortage of opportunities to be had.

An advantage for Stouffville’s young players, versus ones on much older teams, is that they’re getting into every situation this year, allowing them to truly take on the high-stakes scenarios that come with being an Ontario Junior Hockey League player.

“Well, it’s the only way they’ll learn and improve, if they play a lot,” Burrows said. “We’ve got first-year players playing against third and fourth-year guys, so what they’re learning now is something they can’t get at a hockey school. If they can finish off strong, as far as their play, it’ll be like a slingshot next year, and they’ll notice a big improvement.

“In the first half of this year, there was a lot of panic at times, whereas now, we’re not winning as much as we want, but the game has slowed down for them,” Burrows added. “Our shots against are down, our penalty minutes are down. You have to really look before you make a comment about our team, because it’s about improving for next year and winning as many as we can this year, of course, but all of that will propel the kids into next year.”

While all of the rookies have had their moments, Burrows pointed out a few that have exceeded expectations.

“Obviously, I’ve been really impressed with (goalie Damon) Beaver over the last half of the year,” Burrows said. “He’s shown me that he can play a big game and make the big save at the right time. Probably the thing for him still is to get in better shape, because I think he can be a dominant goalie in our league.

“Up front, Charlie Da Fonseca and Connor May have really improved, the Russians have improved, and everyone has really, just some more than others.”

The biggest jump by a Stouffville player would likely be Barrie native Charlie Jeans, who burst onto the scene and now plays big minutes for the Spirit.

“If you take a look at a kid that nobody probably knew about and didn’t look as smooth as the rest of them, it’s Charlie Jeans,” Burrows said. “He’s really improved and he plays a hard game. He’s difficult to play against and he works hard. You can just tell now that he’s starting to get some confidence in his offensive game.

“He’s a guy that every player on our team wants to play with,” Burrows added. “When you have a kid like that, it means he’s improving and he works hard.”

The Spirit have looked much better in 2019, reducing their goals against and limiting their penalty minutes as they adjust to the OJHL game.

Burrows believes that, if this team can continue to grow in the offseason, they will be well on their way as a much more veteran group in 2019-20.

“Overall, the number one thing our team has to be is in better shape,” Burrows said. “That doesn’t mean we’re out of shape, we’re just not in Junior A shape and we’re getting pushed off of pucks. If those 15 kids go out this summer and come back with 10 pounds on, it’ll change the team.

“When you look at our lineup at the beginning of the year, we had 18 rookies,” Burrows added. “Whenever you have that, it’s tough to say you’ll have a strong year. I would imagine we’ll have 14-16 guys back, which will make up a large part of our team and be a big part of our core. We’ll make some trades in the offseason and hopefully, those will work out and we’ll be in way better shape than we were this Labour Day weekend.”

Andy Corneau photo – Stouffville’s Charlie Jeans is one of a number of rookies this year making a significant impact for the Spirit.