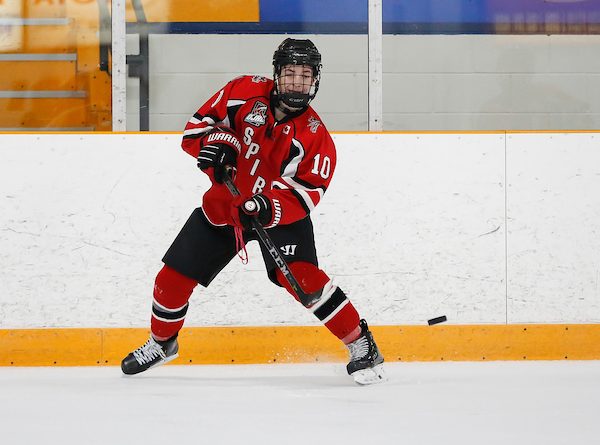 It’s a new season with heightened expectations for the Stouffville Spirit.

After rebuilding last year with a very young roster, the Ontario Junior ‘A’ Hockey League (OJHL) squad comes in a year older and wiser.

The Spirit gave their rookies plenty of ice time last year in the hopes that they’ll be able to take the next step forward.

“You don’t develop on the bench,” Spirit general manager Ken Burrows said. “Sometimes, you have to suck it up and play them a lot to see what you’ve got. We’ve got a big chunk of the kids coming back, so they’ll be that much better for it. We may lose some of our top guys (like Charlie Da Fonseca and goalie Damon Beaver) to the next level.

“But if you don’t play the young kids, you’ll never have older guys that are loyal to your organization.”

“They’re looking for a bigger opportunity than what they had in Oakville and we think we can give them that,” Burrows said. “They’ll be in our top six, so that improves what we already have there. We have Charlie Jeans and Da Fonseca coming back, and they’re pretty good players, but they were rookies last year.

“The two kids we got up front, Tanner and Holden, will both be improvements on what we had last year, so our top six will be better.”

Along with the older guys, there will be some fresh blood battling for spots, as Stouffville was able to snag some talented young players looking to move up from midget.

“We’ve succeeded in getting the kids we went after this year, whereas last year, we missed out on a few when we were recruiting,” Burrows said. “So that means our bottom end will be better, too. We’ve got a kid like Luke Strickland, who was drafted by Sudbury, and if he doesn’t make it there, he’ll be playing with us. If he does play for us, he’ll be a pretty good player here. Anthony Lamanna is another kid we got, a good offensive player, so he’ll be able to put up some points for us.

“We’re definitely going to be better,” Burrows added. “How much we are depends on how everything gels together. When you sign a bunch of kids out of midget, you have to do some developing in order to have success at our level.”

The man tasked with teaching these new charges, new head coach Andre Darlow, has already had plenty of success at the midget level.

“He knows a bunch of them, maybe not personally, but he’s coached against them or seen them play, so that’s a benefit,” Burrows said of Darlow. “He’s won at lower levels but that definitely helps. He needed a new challenge, a higher level, since he’s been pretty successful at midget. This maybe gives him a little more juice, and he’s going to be coaching kids that are pretty good.

“It’s a learning experience for him here, and that’s positive as well.”

Burrows has a few guys in mind that he thinks can take their game to the next level, but it will be all for naught if they can’t collectively improve as a unit.

“If Jeans and Da Fonseca come back, I’d expect them to have pretty good years,” Burrows said. “But you don’t key on one guy getting better, you key on all of them getting better. If one guy has a breakthrough year then great, but you want everyone to improve, and if they all do, the team will be getting better also.”

The Spirit are ready to take a step forward, and for Burrows, that means a group that can contend for a playoff spot.

“Oh yeah, that’s definitely what we’re shooting for,” Burrows said. “I think last year was a down year for our division, but I think it might be better this year than last, so it might be harder to make the playoffs.

“But that’s what happens in junior hockey, and you hopefully do the right things and it works out for you.”

Photo: Charlie Da Fonseca is one of a number of players expected to take the next step in his game for the Spirit. Ray MacAloney photo.