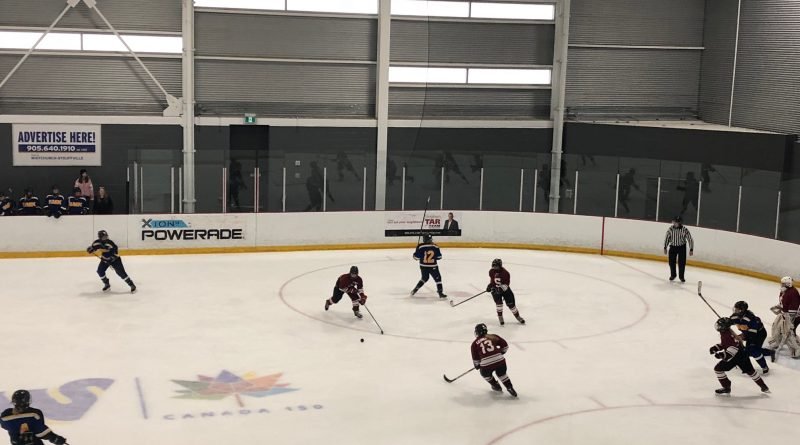 There are plenty of options on hand for the Stouffville Spartans.

The senior girls hockey team has picked up their game this season, nabbing plenty of victories along the way.

With tons of offence and speed in their game, the Spartans are going in the right direction.

“We’re a pretty fast team and we have good depth throughout the team, with players coming from a lot of different (rep) teams,” said Stouffville’s Alexa Feasby. “We’ve got a lot of good goal-scorers on our team, so we’ve been able to get a lot of goals without giving up as many.”

The Spartans have had contests this season where they’ve put out a full lineup, and those where they only had two lines.

In either scenario, Stouffville knows it’s got what it takes to take down the best schools in the York Region Athletic Association’s (YRAA) Tier 1 division.

“It’s really important,” Feasby said. “We have a deep team, so we know that, even if we’re short a couple of girls, we can still go forward and compete with the other teams.”

Abby Roberts has played on the Spartans for four seasons now, and one last chance at a YRAA title pushes her along.

“I feel like most of the Grade 12 girls want to go to OFSAA, because we haven’t been there in the four years we’ve played here,” Roberts said. “The Grade 9 girls that came in really helped us a lot, and I think we’ve meshed more as a team this year than last year.”

After losing a number of seniors from the 2017-18 squad, a bright new crop of freshmen have come in and set the tone for Stouffville this season.

“I think some of the younger girls that come in do play on some more competitive teams than some of the older girls, so, not knowing the dynamic of the team yet, they come in and set a new standard,” Feasby said. “So those girls give a new perspective to high-school hockey, coming in and having never seen it before.”

Players like Roberts have been able to work well with younger teammates, making her line one of the most potent in the league.

“We’re working (together) way better than last year,” Roberts said. “I’m communicating more now, because of the way our team meshes, and more communication is good.”

She’s also a high-level player, suiting up for the Markham-Stouffville Stars midget double-A team, so that doesn’t hurt when dropping down to the high-school game.

“Playing at a higher level, you always have to be going, so definitely my endurance is (a plus),” Roberts said. “Also, my sense of hockey (is a strength). When you play midget double-A hockey, you have a better sense of hockey and hockey (IQ) that you can really bring here.

“You also get a little more time with the puck here, so that helps, too.”

With the regular season wrapping up soon, the Spartans have already locked up a playoff spot.

That being said, there are still a few things they’d like to tighten up heading into the postseason.

“I think our defensive-zone play we could work on a little bit more,” Feasby said. “As well, we need to block more shots from the point, because we give a lot of those up.

“Our puck movement through the neutral zone and our team play could get better, too.”

Once that’s all working together, though, look out.

“I think our tape-to-tape passes make us dangerous, for sure,” Roberts said. “When we’re on, we’ll connect in their end and that sets up a lot of goals.”