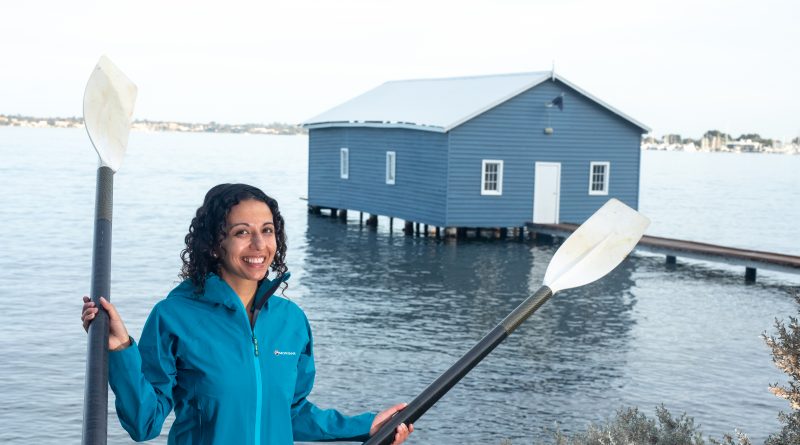 A trip to Hawaii has to be on anyone’s list of places to visit.

Heather Taylor has one planned for April 2020, but she won’t be boarding any flight to the tropical island.

Taylor instead will be rowing more than 3,890 km across the Pacific Ocean from Monterey, California to Hilo, Hawaii. A journey of more than 2,100 nautical miles all by herself.

You get wanting to head to one of the most beautiful destinations in the world, but there has to be an easier way of getting there? How do you decide to row there?

“You just decide to,” the Stouffville native said before laughing out loud.

She’s hoping to raise $100 for every mile of the extensive journey and donate the money to individuals and communities facing poverty through the work of Emmanuel International.

Taylor grew up playing on the Emmanuel International office floor where her parents worked for over 40 years to serve the rural poor in East Africa, Haiti, Brazil and Philippines.

“It’s just a way of doing something for the injustice I see in the world,” said Taylor, who is studying physics and space science at the Royal Military College of Canada in Kingston and works in Australia (her paternal homeland) for the Western Australian state government in disaster management. “I’ve always been aware of extreme poverty and my dad has worked for Emmanuel International for my whole life and I grew up overseas as well, so it’s something that has always been in my heart.

“I’ve done different things along the way, doing fundraising and when I heard about ocean rowing – I’m a rower by background – it was something that perked my interest and I was trying to figure out how to combine the two. That’s how I got into doing it.”

Taylor would watch her parents and others dedicate a big part of themselves to these important projects and it served as a big inspiration for her.

“Watching people instead of having a career and earning lots of money give up that and then go overseas,” she explained. ” I think certain individuals choose to use their lives to make a difference. It certainly impacted me as a kid.”

So did seeing poverty first hand. Taylor has spent time in Haiti and Malawi with Emmanuel International and lived in Indonesia for several months.

“I first went to Haiti in 2001 and that was my first time seeing poverty,” she said.

Which is why she wants to step to the forefront herself and help.

“I enjoy my work and other things, but this is definitely what my heart beats for,” she said of helping the poor.

Rowing has also been a passion for Taylor. She played rugby through high school, but the risk of another concussion and her love for water led her to giving rowing a try.

“I think I’ve always loved water in general,” she said. “I was always the one who wanted to find a camp site that has a lake or a pool so we could go for a dip when we were travelling. I started rowing in my last year of high school. I really just loved the motion and being in the water.

“If you ever get into one of the singles, it’s just the width of your hips and there’s no more boat. I love just laying back at the end and being in the water.”

Taylor has rowed on lakes and rivers, but heading out on the Pacific Ocean for 60 to 90 days alone presents a whole other challenge. She was to tackle the journey with two other rowers, but when they couldn’t commit Taylor decided she would go it alone.

“I think to be alone for that long, it’s hard to say when you’re going to crack and how bad it will be or if you’ll be fine,” she said. “I’ve probably done quite a bit on my own and I don’t think I’m too worried. When I was in Indonesia, while I did know some Indonesian friends that were there, I was the only one with a Western background and with the work I was doing I was pretty much doing things on my own.

“I’ve spent quite a bit of time in my company. It’s pretty hard to isolate yourself from the rest of the world, so you don’t really have the opportunity to test how you’re going to go unless you got a couple of months to go live in the mountains or something.”

Which is why preparation for the journey is so important. That includes land training,  weight lifting, general cardio and learning old sea skills like how to keep the boat maintained and how to fix everything on the boat. There’s also navigation, as well as proper interpretation of the weather.

Taylor will have 120 days of rations, a water maker and three sets of oars. She will be on her own until she arrives in Hilo, which is why Taylor has a sports psychologist helping her prepare with the mental challenges she will face such as how to push through the physical exhaustion.

Taylor hopes to become the first Canadian to complete the mid-Pacific row. The shortest anyone has ever done the route is 58 days. There has been only one other women who has done it on her own and it took her 99 days.

“If I can do it in less, that would be great,” said Taylor, who is hoping to have her parents and sister, along with some friends there when she arrives in Hilo, Hawaii.

While Taylor will certainly find out more about herself with the challenge, what’s important to her is drawing awareness to poverty and reaching out to get others to do more to help those in need.

“I could easily go across an ocean,” she said. “I could pay $20,000 and do it in a team. When my teammates pulled out, the only reason that it stuck with me is that I wanted to fundraise for this particular project. That’s why I wanted to do it and why it has stuck with me in continuing on and doing it.”

Proud of her home town, Taylor would love the Stouffville’s logo on her boat and is hoping a local business or the town itself will step up and sponsor her. Anyone else wanting to help her raise funds for Emmanuel International Canada can go to the www.pacificgiantsrow.com website and click on the links to donate.

The Ontario government announced that it will continue to support provincial electricity consumers by providing stability and greater customer choice,

Staying resilient during the COVID-19 pandemic