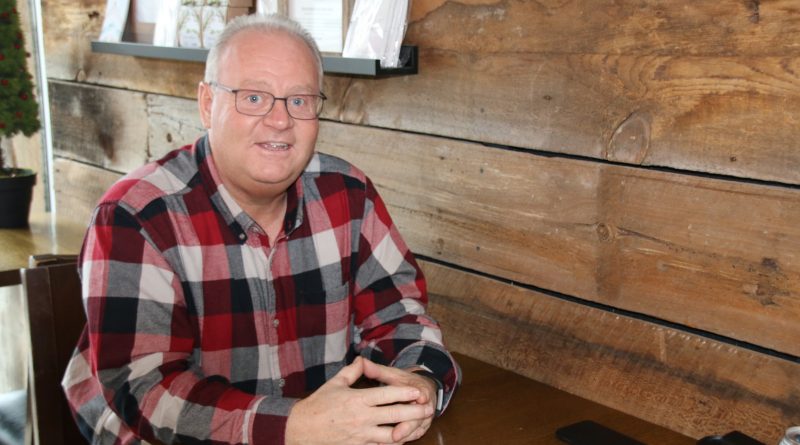 Richard Bartley is happy to be back. Not that he really went away mind you, but the old, and once again new, councillor for ward 5 feels like his return to council was needed.

With Iain Lovatt’s decision to take a run for and win the mayor’s role, the seat that Bartley had represented for eight years before he himself had a go at the mayor’s chair in 2014, was again vacant. Bartley, who has long worked in the automotive business went back to that world full-time, explains that he never lost touch with what was happening at the town office and kept productive friendships and had many conversations with staff that had left the town or stuck it out during what is seen as a turbulent time in town lore for staff. That, he says, prompted him to return and is his initial focus.

“I ran my campaign on staff stability,” he notes. “We’re working hard at that. But the atmosphere at the town has changed. It’s a more positive atmosphere and productive.” He adds that qualified people have indeed been making the “phone ring off the hook” with people saying we’re interested.

However, the other issues that Bartley says drives him are very much in line with what other members on council have presented in their vision for the next few years.

“We’ve got to try to get some industries in here. It would be nice to get the Highway 404 lands going,” he says, referring to the development of the sliver of land that run between Highway 404 and Woodbine Ave. up to Bethesda Rd. that council has formally requested the province open up for development. He also says downtown is in need of a boost saying “the downtown core is first and foremost on my radar. The Pace building is the future of downtowns. We are probably going to have one of two more of these buildings somewhere along this corridor to bring people down here.”

Not that he wants runaway development, but he says that it just makes sense that if people are interested in developing a property or have a great idea that “I think it should be priority one. We should listen to them.”

One thing he did listen to residents about was allowing pot shops in town. He along with others on council voted to opt-in to the provinces pot shop scheme. At this point in time, he says what drives his thinking is the concern whether or not that pot on the streets is safe, responsibly controlled and not funding criminals.

Absentee landlords in the downtown core are also an issue for Bartley, noting that the empty storefronts on Main St. are an eyesore but if landlords are covering their costs with the rent from upstairs footage, they don’t care what the streetscape looks like if they don’t run a retail business or live nearby, suggesting that some of the rents being demanded are close to Toronto rates on a square foot basis and not realistic.

For that he suggests the town look at some kind of a vacancy tax that can be administered under certain circumstances, but admits he needs to look deeper into what that will entail and if they will need the help of other levels of government to enact it.

But whatever issue we cover in conversation, it is clear that Bartley is in his element talking about the town and it’s a relief to be back. “I thought my political days were over,” he says of his 2014 defeat adding, he didn’t have the support at home to take another stab at mayor. “Running for mayor is hard on a family,” he observes. But with old friends and supporters calling to encourage him to take up his ward 5 post he says, “I had a board meeting with my wife and she said, ‘if you want to be a councillor, I’m a hundred percent behind you.'”

Now firmly entrenched in the role, he says he is enjoying working with the new council and likes what he sees in the experience and enthusiasm the members bring. Bartley also centres out ward 6 councillor Sue Sherban as being a great add to the group saying, “she’s in this for the right reasons. She just loves this community. She is knowledgeable and I’m looking to learn (from her).”

Bartley, who notably did not use social media at all in his last election run, explains that while he is forward-looking, he is old-fashioned in some ways and he’s not ashamed of it. “No Facebook, no Twitter or any of that stuff. I know it’s important but I am a ‘hands-on’ kind of guy” he explains saying that the most important thing he brings to the discussion is his sincere desire to communicate directly with the average person who sometimes feels they are not heard and why he knocked on “just about every door in the ward” during the election. “People appreciate that,” he says.  “I am here for the residents. I like to look out for the underdog. They matter.”

Photo: Ward 5 Councillor Richard Bartley promises to be there for the everyday, underdog, a role he relishes.

2 thoughts on “Richard Bartley back fighting for the underdog”

Main Street was home to Giles dealership for five decades