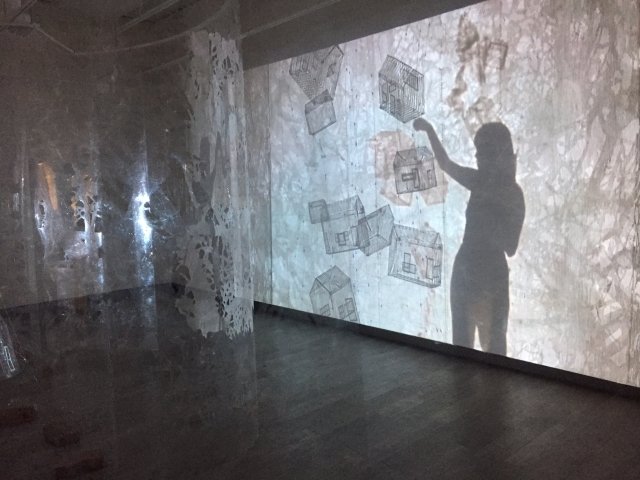 The Latcham Gallery presents Revel, a large-scale installation by
Toronto-based artist Ed Pien, May 18 to July 1, with an artist talk and reception on
Thursday, June 22 at 7pm.

Revel is like a dream. Upon entering the gallery you become immersed in that dream. Projected
light fills the space through a large transparent spiral structure and within the light, you catch
glimpses of a figure in silhouette. The figure is the shadow of a young woman who gently
attends to floating objects that resemble tiny houses and buildings, all within a cloud of organic
forms and all appearing upon the gallery wall. As you move deeper into the space you literally
become part of the scene as your shadow starts interacting with the shadow of the figure before
you. If there is no-one else in the gallery with you, it is a little unnerving to be shadow dancing
with a spectre.

Pien has been drawing for almost three decades. In that time his mark-making has been
created with many different media and upon many different surfaces and supports. What once
manifested itself on paper with pencil, pastel and paint have evolved into intricate cut-out works
on paper, metal and other materials often turned into installations that fill entire rooms. For
Revel, Pien has created an eight-foot high, clear Mylar, spiraling screen that has been
meticulously cut into a jungle of branches and organic forms. Several 3D sculptural forms are
nested within a web of lines that are suspended from the ceiling at the center of the screen,
casting their own shadows. The entire tableau is then illuminated by a video projection which
plays out on the walls of the gallery.

Pien’s multi-layered installation is a meditation on the way the past can haunt our present. It is
a response to his experience of working with immigrants, refugees, and asylum seekers
overseas. The shadow of the young woman handles the house forms as though she might be
playing with them, perhaps remembering her childhood home far away in time and in distance.
But she is also considering the structures carefully as though she is thinking about her future
and the new home she will create.