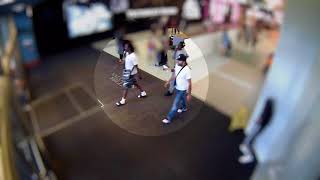 York Regional Police have released a video of three suspects sought in an Aug. 28 shooting at Vaughan Mills Mall and the vehicle used to flee the scene.

Police arrived on the scene, shortly after 7 p.m. following reports of apparent gunshots in the parking lot. Witnesses reported the suspects had fled the scene. Police later learned a man went to hospital suffering from a non-life-threatening gunshot wound. They believe he had been involved in the earlier incident outside the mall, in which he had a firearm.

Police released the video (youtube.com/watch?v=2shr93wyUwY) on Sept. 6. The image of the suspects was captured just prior to the shooting. Anyone with information about the identity of the suspects is asked to contact Criminal Investigations Bureau at 1-866-876-5423, ext. 7441, Crime Stoppers at 1-800-222-tips or leave an anonymous tip online at 1800222tips.com.