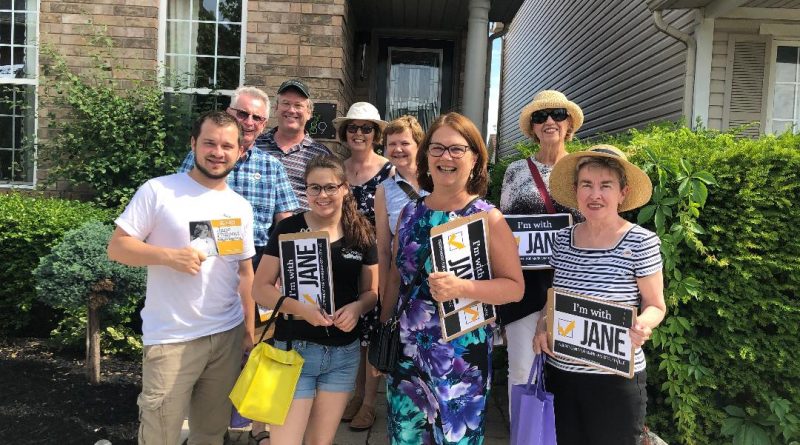 Jane Philpott has seen the dysfunction in Ottawa.

The Markham-Stouffville Independent MP says she has watched firsthand how time, money and energy are wasted on political games and partisan efforts to gain power.

In March, she resigned her seat in cabinet because she had lost confidence in how the government had handled the SNC-Lavalin affair. A month later, the prime minister made the decision to expel her from the Liberal caucus.

Philpott says she stood for what is right and now as she knocks on doors in bid of her re-election ahead of the Monday, October 21 Canadian federal election, she is thankful for the reaction and support she is getting from her constituents.

“My volunteers and I have knocked on close to 20,000 doors so far,” Philpott told the Stouffville Review. “I hear positive comments from people about having a Member of Parliament who will speak for them. They appreciate that I have always stood up for the best interests of the country. Constituents want a representative who will listen well and speak freely on behalf of the community.”

In what some expect will be a closely-contested battle of the doctors, Philpott will face Liberal candidate and former Ontario Health Minister Helena Jaczek. Theodore Antony (Conservative), Roy Long (Green Party) and Jeremy Lin are the other confirmed candidates running.

In a time where election races can turn nasty, Philpott is focusing on the issues and how she can continue to help here constituents.

“People are concerned about how divisive politics has become,” she said. “I believe we should focus on the important issues facing the community and the country. Elected officials need to do better at collaborating across party lines to accomplish good work.”

Philpott says the issues she will look to address if she is re-elected include climate change, pharmacare, democratic reform, housing affordability, rural broadband and improving transit and transportation.

The local politician says she hears about many issues from constituents, but there is one that stands out.

“One of the most common concerns is climate change,” Philpott said. “Many citizens want to support someone who will take a strong stand on climate action.”

Here’s a look at the other candidates running in the Markham-Stouffville riding.

HELENA JACZEK – Voters in the riding will have a choice between two female doctors as the former Ontario Liberal health minister will be seeking to defeat MP and former Liberal Jane Philpott.

Jaczek was an MPP for the riding of Oak Ridges-Markham from 2007-2018, where also served as Chair of Cabinet, Vice-Chair of the Health, Education and Social Policy Cabinet Committee, as the Minister of Community and Social Services. on the Select Committee on Mental Health and Addictions an the Standing Committee on Finance and Economic Affairs.

The former Medical Officer of Health and Commissioner of Health Services for 18 years with the Regional Municipality of York, Jaczek currently sits on the boards of Reena, an agency providing services to adults with developmental disabilities and Yee Hong Centre for Geriatric Care, where is Chair of the Quality Committee.

Jaczek moved to Canada from England at the age of 12.

The Liberal candidate believes electing a Conservative government will result in cutbacks.

“Andrew Scheer – a real Conservative who will make cuts if elected,” she said on Twitter.

THEODORE ANTONY –  The Conservative candidate says he holds the experiences of new Canadians close to his heart after immigrating himself to Canada with his family.

Having built his business and raised his family here, the entrepreneur says he cares deeply about the community and the issues that matter most to the constituents in Markham-Stouffville.

A director in the RESP Industry, Antony holds two university degrees (Bachelors of Science and Bachelors of Business Administration) and has experience with clinical and scientific research in biochemistry.

Theodore and his wife, Sara, live in riding. They have two children and a grand-daughter

“The writ has been dropped and the election is on,” Antony said tweeted out on Twitter after the elections was called. “I am ready alongside @AndrewScheer to deliver a new Conservative government on October 21st and end waste and mismanagement in Ottawa.”

ROY LONG – The Green Party candidate says he’s just a regular guy trying in his own little way to make the world a better place.

The son of Irish immigrants, he was the first member of his family to graduate from university and believes today’s education is tomorrow’s economy. He sees the high cost of education as a major problem for Canadians.

Long has a degree in business and has worked at the family locksmithing business for almost 40 years. An avid volunteer in the community, he has spent hundreds of hours coaching hockey and softball and helping young people build their confidence at the Young Leaders Program.

He and his wife have two boys, that have just graduated from college and university.

PEOPLE’S PARTY OF CANADA – The People’s Party of Canada did not have a candidate for the riding at press time.

NDP – The New Democratic Party had yet to nominate a candidate for the riding before our press time.

Put away your phones and grab your favourite reads off the shelf for Book Lovers Day! The annual celebration takes