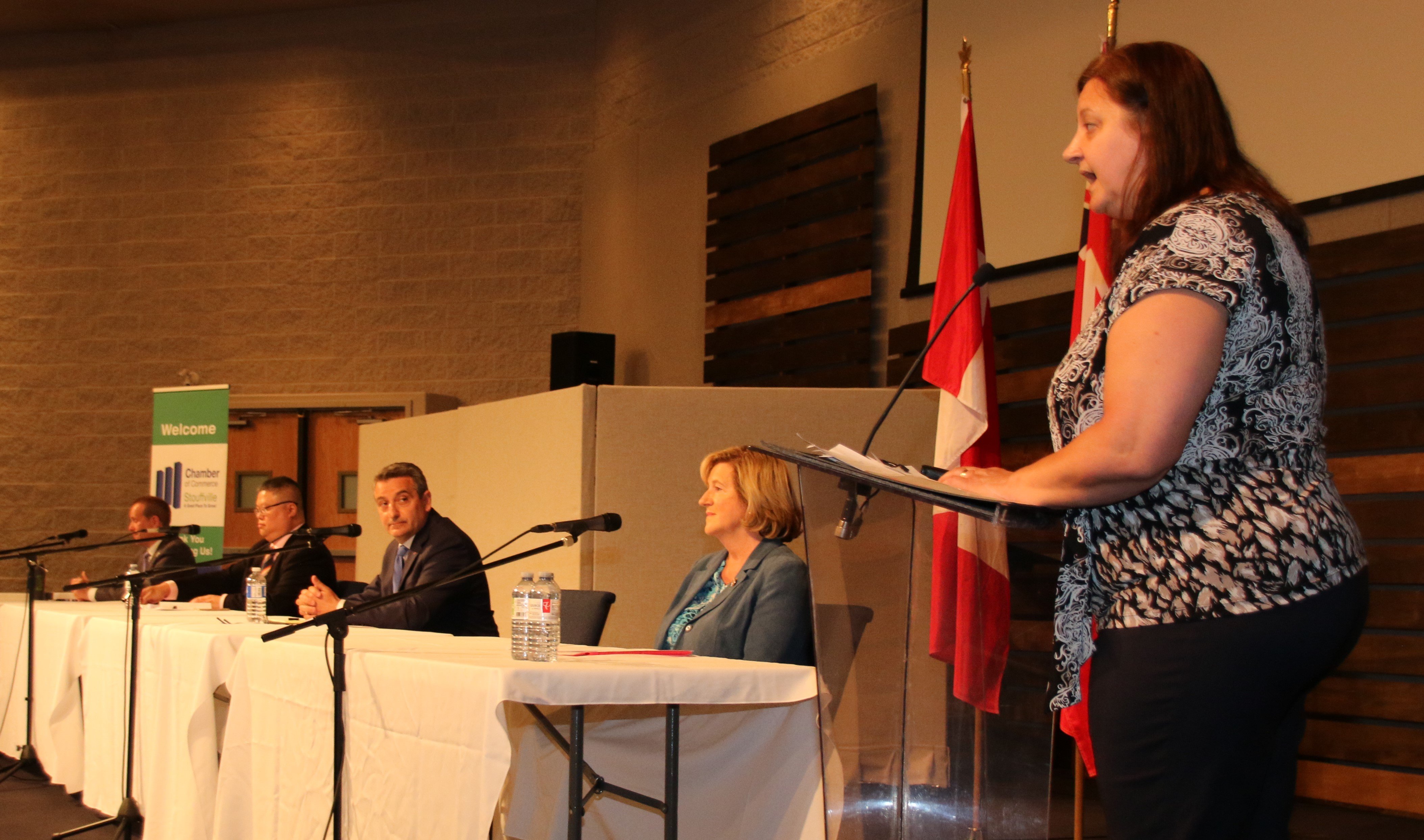 It’s rare that a political party survives 15 years in power, but the provincial Liberals have managed just that. Sure, the Progressive Conservative party dutifully shot themselves in both feet to let two elections slip through their fingers. But now, with a very bombastic and controversial leader at the helm, the PCs are about to try again to dislodge the Liberals and one of the most unpopular Premiers in provincial history.

Markham-Stouffville Liberal candidate and provincial health minister Dr. Helena Jaczek lets out what can be described as a small groan when the polling numbers of her leader are mentioned.

“I’m just going to emphasize the difference in the platforms,” Jaczek says, defending Kathleen Wynne as a tireless, intelligent, dedicated public servant. “Why that doesn’t really resonate is a puzzle for those of us who know her.”

The low polls for the Liberal leader have been noted by party strategists and they have stayed far away from any Team Wynne-style branding. Instead they a whirlwind of spending and social initiatives over the last couple of months. For Jaczek, who remains a well-liked and respected local figure, those initiatives will be her campaign’s focus.

“Health and education are issues across the province,” she begins. “At the (constituency) office, one of most number of phone calls we get is about home care, long-term care for parents. This is something obviously in our budget we’re going to put huge emphasis on, and affordability for seniors.”

She goes on to point out programs like free post-secondary tuition for lower income earners, a large hike in minimum wage, free medical prescriptions, free dental care, free daycare and more promises by the day will be key to local electoral success.

So, is this a case of expensive policies being too important not to do?

“Exactly,” she says. “I think this is where we’ve come to. It’s a deliberate choice and it’s going to put the government in deficit.” Jaczek notes previous PC governments also ran deficits.

But the deficits are huge – almost $7 billion by the Liberal’s own estimation next year with no balance in sight. Ontario’s auditor general and financial accountability office suggest, in reality, the figure is closer to $13 billion.

But for Jaczek, the “bold” platform, combined with her undeniable work ethic and strong character are still a compelling reason to put an “X” next to her name on June 7. But she says she is content to “let the chips fall where they may.”

Paul Calandra, a local fixture in his own right, is hoping the chips are going to fall his way. The former area MP is back for another turn at the ballot box as the Progressive Conservative candidate. He too is content to run his local campaign on the party platforms.

Calandra readily acknowledges the good character and work-ethic of his Liberal opponent, pointing out he had an excellent working relationship with her when he was MP and quite likes her. However, he is pointed in his criticism of Liberal leader Kathleen Wynne and the platform Jaczek must defend.

“It’s not just about their platform,” he says. “This (election) has very much become a referendum on their performance over the last 15 years” adding that Ontario now pays $12 billion per year in interest payments alone.

By comparison, he points out that fiscal responsibility, as well as nuts-and-bolts issues like fair taxes rates, better managed hydro rates and government efficiencies, are fundamental to his party’s approach. He also says that a vote for him will also ensure Markham-Stouffville has no gap in capability locally once the election is over.

“The day after the election, we can hit the ground running, meet with our partners and start getting the job done,” he says noting his eight years as a staffer at Queens Park and years as an MP have allowed him to develop a depth of knowledge and important relationships that he can tap into immediately.

Locally, Calandra says overall affordability is a key concern for the average household he has talked to on his canvasses as they see hydro, water rates and mortgage costs inch up.

“They wonder how much more can we afford to borrow,” he said. “A lot of them say ‘we’ve kind of been lied to. You tell us one thing and We didn’t vote for a lot of the things they talked about and despite all the debt we don’t feel like we’re any further ahead.’”

On particular policy issues, Calandra agrees that senior care issues are important and the PCs have promised to build 30,000 specialized, long-term care beds to clear up a backlog of equal size they say are clogging up regular hospitals at great cost. He will focus on math scores in public schools, provide tax relief for low-income earners and although they will not roll back the minimum wage increase, they will hold off on the dollar an hour increase scheduled for next year, making some small business owners happy.

“For the most part, people know I’m a ferocious advocate for the community,” he concludes. “Ultimately, when people put that together with (the PC platform) I think they’ll give us their support.”

The NDP have Scarborough-based Kingsley Kwok as their candidate while the Greens are represented by professor Jose Etcheverry.