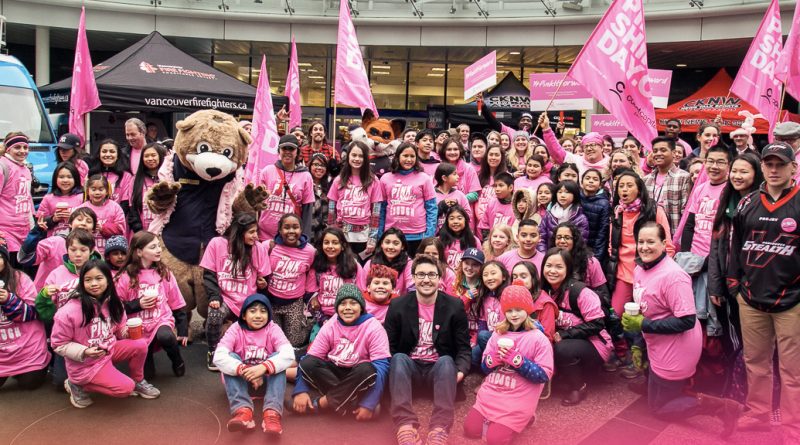 Thanks to the help of a pink shirt, an act of kindness inspired a movement, now known nationally as Pink Shirt Day or Anti-Bullying Day.

More than a decade ago, Nova Scotia students David Shepherd and Travis Price, bought, wore and distributed pink shirts at their high school, after a male peer was bullied for wearing a pink shirt on his first day of school.

“I learned that two people can come up with an idea, run with it and it can do wonders,” says Price, who was 17 at the time of the incident. “Finally, someone stood up for a weaker kid.”

After the pink protest, Canada now recognizes Feb. 27 as the day Canadians across the country wear pink to stand up against bullying and spread awareness. Since 2007, the idea has continued to grow, with worldwide support and participation in countries across the globe including Japan, New Zealand, China and Panama, who are now organizing anti-bullying fundraisers of their own. Canadian fundraisers, such as the CKNW Kids’ Fund, also aim to raise money to support anti-bullying iniatives and foster healthy self-esteem in youth through Pink Shirt Day. In 2018 alone, more than 59,000 children were impacted through those support programs.

“It looked like a huge weight was lifted off his shoulders,” Price adds, recalling the moment the bullied student saw pink shirts being handed out. “The bullies were never heard from again.”

Schools in the community are coming together to participate by wearing pink to encourage kindness and show intolerance to bullying – not just for a day, but 365 days of the year.

Carolina Di Giulio is a student reporter for the Markham Review and its sister papers. A Markham-native and senior at Markham District High School, she's always looking for new stories to tell and write about.