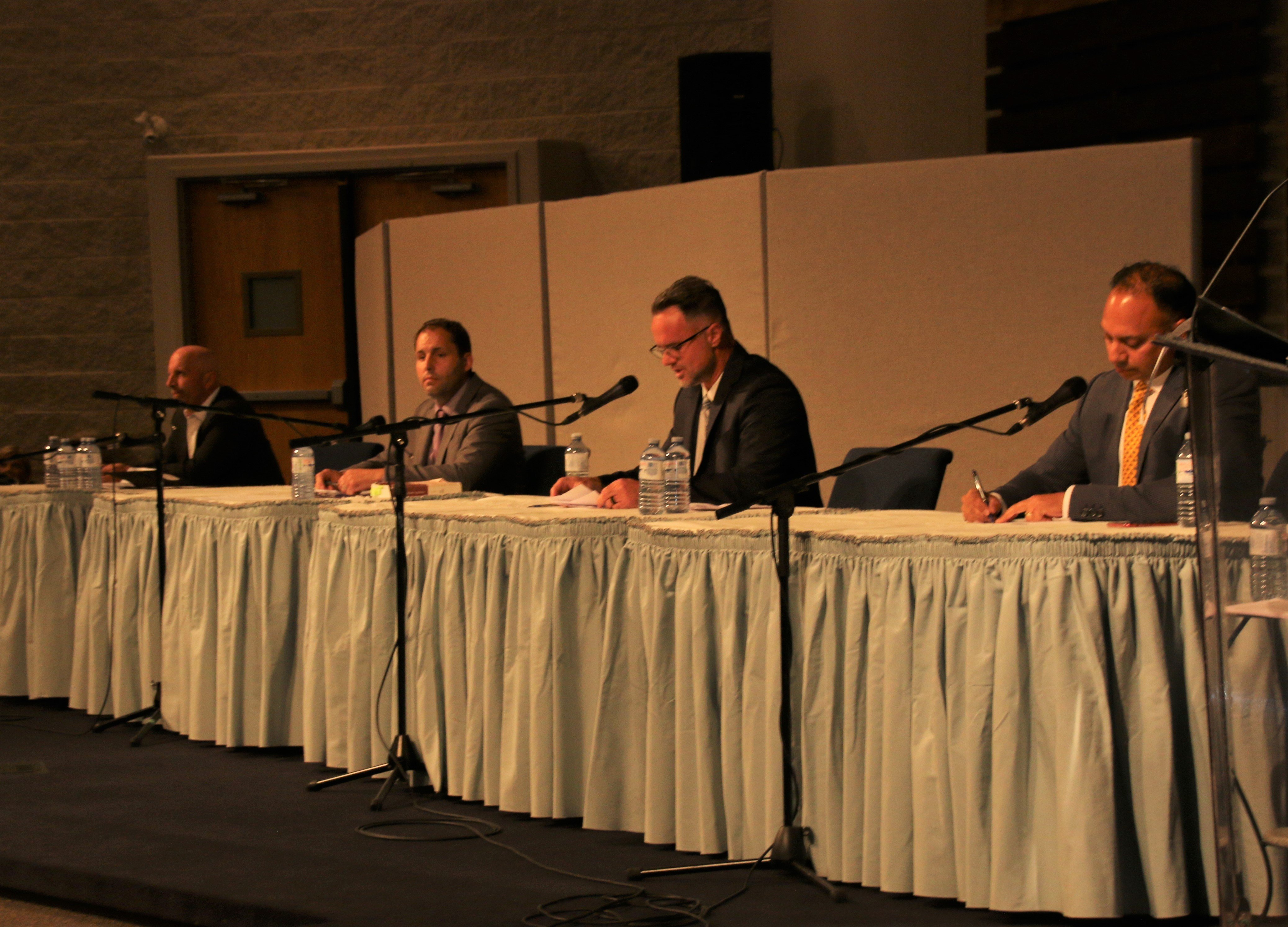 Some came expecting a brawl, some came for information and some came out of curiosity. But come they did – an overflow crowd that doubled the number of seats available at the Eastridge Missionary Church main hall – for the final mayors debate in a hotly contested run by four candidates: incumbent Justin Altmann and challengers Keith Acton, Anand Date and Iain Lovatt.

With the lobby full and people lined up through and out the main door of the church, each candidate got an opportunity to make their pitch. The consensus from the well-behaved crowd seemed to be that no knockout punches were thrown. Those seeking clarity to the question of who will be the next mayor or who they should vote for likely found little to sway them, as all candidates presented as funny, well-spoken and capable in defence of their positions.

Boston Pizza owner and ex-hockey pro Keith Acton provided the most pointed and persistent criticisms of the current mayor and council, lamenting the money and time spent on lawyers and negative publicity the town has seen directed its way. Acton stressed his motivation to avoid public spectacle and bring respect back to town activities. “The turnover at the municipal offices has got to stop” he declared, highlighting his acumen both as a team player and fiscally responsible small-business owner. Perhaps aware of his stern game-face, Acton, himself, noted he might come across as angry, but pleaded it was civic passion, not anger, that drove his charges.

Meanwhile, Altmann, on the defensive for much of the night, chose a high road, mostly avoiding responding directly to the more pointed personal criticisms and pointed instead to a vision going forward that required his experience. “Where I started four years ago to where I am now, I’m a completely different person” he noted. “Have I learned a hell-of-a-lot? Absolutely.”

Altmann, repeatedly thanked town members for their support and guidance, while emphasizing current developmental projects like those, he says, were underway with billionaire Frank Stronach, whose endorsement was recently announced on Altmann’s social media.

In response to an audience question, Lovatt was quick to note the things he has learned as an elected official: to take responsibility for errors, learn from them and apologize to the people affected, in a not-too-subtle jab at the incumbent, whom, while generally apologizing for the negative attention to the town, has pointedly not apologized for specific wrongs attributed to him by the integrity commissioner and the town itself. Town officials launched new court proceedings against Altmann in the past week. Lovatt, too, emphasized his ongoing work at the council level and his ability to listen, while affirming his desire to build bridges with other levels of government, something he berated Altmann for not being able to do.

Date underscored his life-long residency in town and an expertise in human resources that would be required to deal with municipal personnel issues that are still ongoing. He lamented the lack of stability in local government and emphasized his desire to reaffirm the contract of current town CAO Roman Martiuk, who is supporting recent court actions against the incumbent.

But, after four well-spoken final pleas from the candidates, it was apparent that, while few minds may have been changed, a tough decision lies ahead as the town must choose between four formidable opponents on Oct. 22.