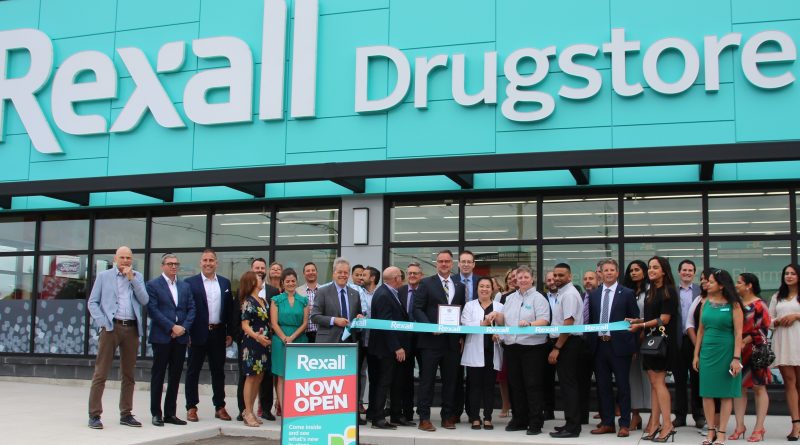 The transformation of the Main St. site that was once home to the Southwire building is almost complete as a number of new businesses have opened up and are doing a thriving business as Stouffville continues to rev it’s commercial engine.

The obvious start to the site transformation was the Longo’s now standing at Main St. and Mostar St. While Longo’s has been up and running since October of last year, the site has seen the opening of Sports Clips, a dental office, Pizza Pizza, Starbucks among others and this week saw the opening of the new-style Rexall’s that plans to threaten Shoppers Drug Mart’s domination of the health and wellness sector in town.

Rexall senior management team were in attendance for the event and were welcomed by Mayor Iain Lovat and Ward 4 councillor Rick Upton.

The next significant site that will draw resident attention might well be the SmartCentre plaza that already hosts Walmart, Canadian Tire and others. Council has already approved in principle the mixed-use project.

In a recent press release the Town notes that SmartCentres said there could  be 1,005 residential units and 1,078 jobs within the conversion lands. They would contain 8-12 storey mid-rise building,  hotel space within a shopping center. In addition warehousing and professional office may also be included.

The Region of York now has final approval for that development which may come later this year further increasing the flow of new businesses opening up in town.

photo: The newest Rexall is one of the many new businesses that have come to occupy the “Longo’s plaza” on Main St.