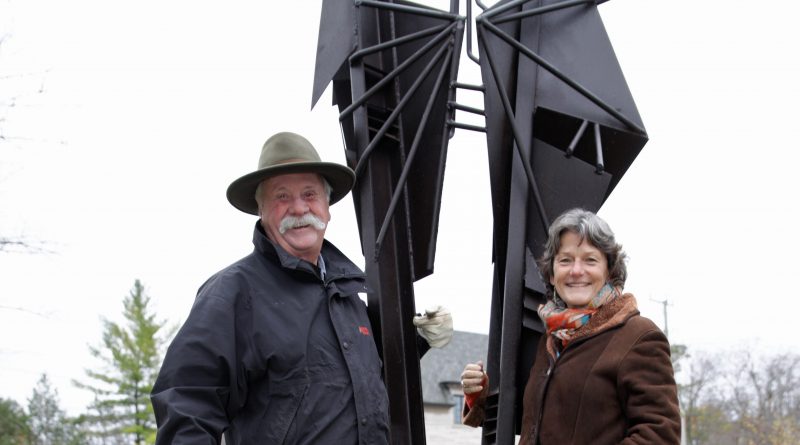 Whitchurch-Stouffville’s Sculpture Walk got a new addition gifted from the University of Toronto School of Architecture.

Ron Baird, the artist, is one of Canada’s most successful sculptors having executed over 300 public, corporate and private commissions. He was also the founding director of the Latcham Art Gallery.

The sculpture, titled ‘Sentinel,’ is a large scale corten steel sculpture dating to 1963-64. ‘Sentinel’ is composed of angular planes and bent steel rods and measures 12 feet in height.

Corten steel is a group of steel alloys which were developed to eliminate the need for painting, and which form a stable rust-like appearance after exposure to the elements. Baird’s biography states his art “celebrates the social, historical and cultural threads of the community, and honors both natural and urban environments.”

“The community treasures art and culture,” says Mayor Iain Lovatt. “We are thrilled to have ‘Sentinel’ as an addition to our Sculpture Walk and look forward to continuing to value art in the town.”

The town currently displays eight sculptures as part of the Duffins-Stouffville Sculpture Walk which runs along Stouffville Creek, to the north and south of Main Street.  Three of these sculptures were created by Ron Baird – ‘Fractal’ and ‘Blue Angel’ are located south of Main Street and ‘Nutum,’ is situated outside the main entrance of 6240 Main Street (the former Latcham Art Gallery). ‘Sentinel’ is installed just north of Somerville Street, east of Market Street.

Photo: Ron and Sara Baird pose in front of the ‘Sentinel’ sculpture.