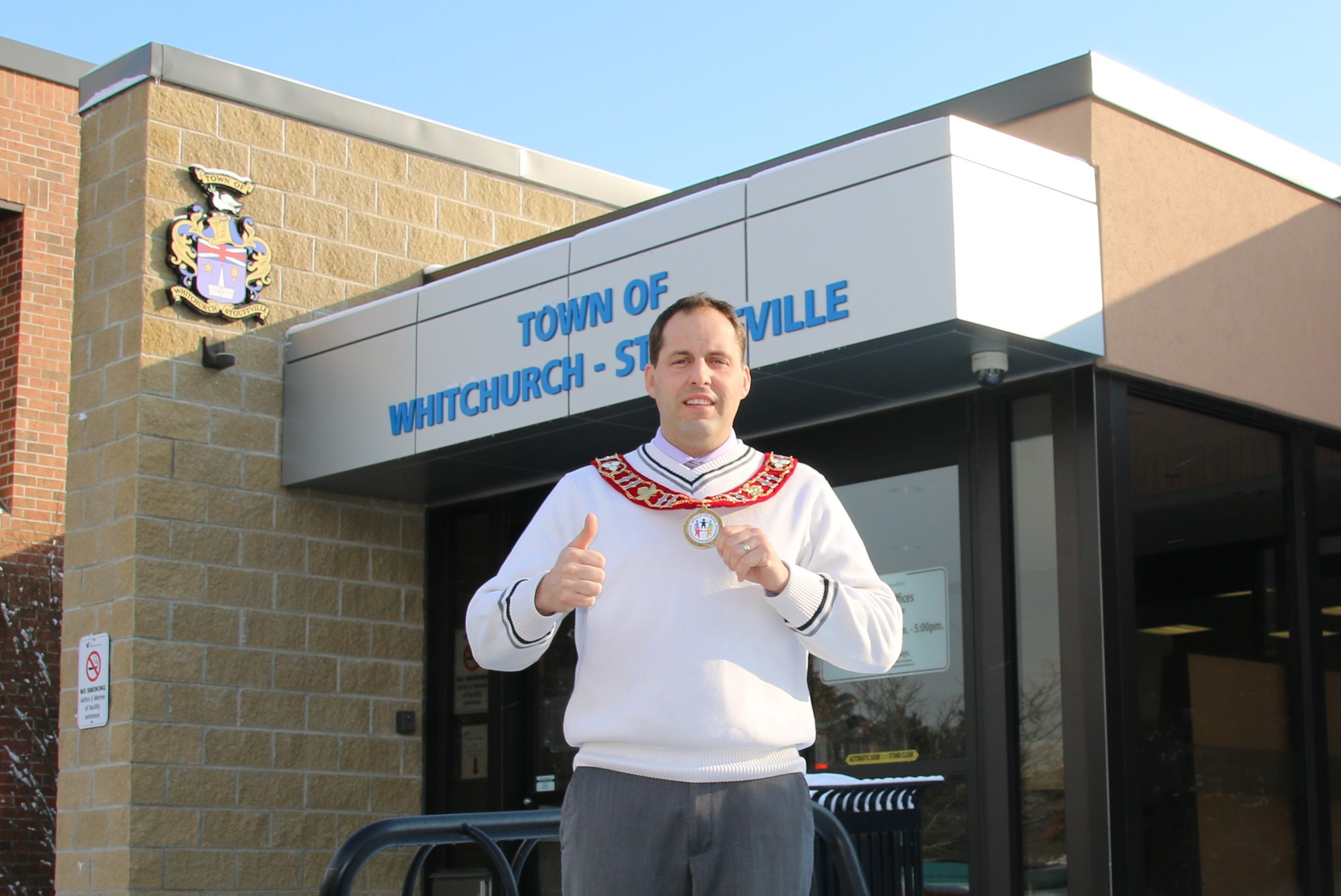 Mayor Justin Altmann is probably secretly glad to see 2017 in the rear-view mirror of his noticeable green and white pick-up truck. After all, a long and cumbersome process to find a new town CAO, sometimes-fractious council meetings, unwanted publicity on town personnel issues in Toronto news outlets, expense-related controversies and an Integrity Commissioner inquiry can wear on a person. But if you figured he would be bowed by those challenges, you’d be surprised to find that a strong-spirited Altmann is not giving an inch to criticism. He has focused firmly on more meat-and potatoes issues he feels Stouffville needs to deal with this year. So, with the promise of 2018 fresh in mind, the mayor sat down with the Review to take stock of what will be a municipal election year.

With the provincial election set to run its course by June 7, Altmann acknowledges that many, including himself, will be spending time prepping for October municipal elections shortly thereafter. He dismisses potential challenges on the issues noted above as just part of the process. “They’re going to bring it up regardless’, he says. But he asserts he has conscientiously documented all circumstances and is content to run on his record while critics do what they may.

The Integrity Commissioner report is at the centre of criticism but the mayor is pointedly not apologizing for situations outlined in the report – although he was asked to. “I’m not going to apologize for errors (the Commissioner) made”, he says, itemizing four pieces of the report that are, in his estimation, “not factual.” Altmann adds how he sees no attempt on the part of the Commissioner to address those points of contention such as inaccurate quotes attributed to him. He will request a formal judicial review of the matter, which will happen later this year.

But, while controversy continues to stir online, Altmann is effusive in his enthusiasm for the town and his job. He outlines a host of down-to-business priorities he says will occupy his time in 2018.

The budget, always a concern for politicians and residents alike, was approved January 23rd. He notes that some long-awaited residential developments are in the offing which would bring in development charges to finance things like the Main St. reconstruction, which was unceremoniously halted this summer due to underfunding.

Altmann says when infrastructure upgrades like Main St. were planned it was assumed that residential growth would cover it. It didn’t and now the funding problem is a priority for him and council. “Where we had amortized a number of homes to be put in the ground, we actually put in a lot less than that” he noted.  He goes on to itemize other costs that creep up on projects like this in very old areas such as fragile clay piping, environmental damage assessment, foundation repair on old buildings close to the road, new telephone poles and wires among others. Much of these costs were not anticipated in budgets.

While Altmann opines that over-optimistic projections by past councils are part of the problem, the underfunding issue is now sitting square on his plate and members of current council.

“We have about 75 per cent of the infrastructure that needs to be changed in the old downtown” he begins. “We have roughly 3,200 more homes (mostly in the north-east quadrant) to develop for Stouffville. When those homes are developed, all our land is frozen for 10 years and 85 per cent of the land we have is greenbelt, like Oak Ridges Moraine,” referring to lands deemed by the province to be protected from urban development. There is also land deemed as “whitebelt,” not technically green preserves and, at present, not designated for urban growth. So, in-fill developments, many of which are commercial, will have to satisfy increased provincial density targets. It is a challenge and a focus of the mayor.

Southwest town lands are attracting commercial proposals despite provincial restrictions, Altmann notes, but the town is also in competition with other municipalities that have much more developable and cheaper land available. The key, he insists, is getting “the right developments.” That means commercial projects must bring good paying jobs and residential must be “complete communities” with adequate parkland and infrastructure like sidewalks.

The frustration with provincial restrictions, and to a degree, regional government, is a constant refrain from Ontario municipalities but one they are stuck with and no doubt will figure in upcoming provincial and municipal elections.

On other items, Altmann is also typically forward-looking.

Noting an aging population, he is determined to ensure Stouffville’s relationship with the hospital is strong and is excited about the upcoming fundraiser this spring. He does not brush away suggestions that many would love to see satellite services available in town, but concedes that is not imminent.

Overall, Altmann gives a passing grade to how the town is doing under his leadership. While acknowledging challenging growth issues will remain, he maintains things for Stouffville are looking up.

“We’re pretty good” he concludes. “There are no real (serious) issues. If there was we wouldn’t be bickering about $4.67 sandwiches from Tim Horton’s,” referencing one particular expense-related complaint.

So, while 2018 is shaping up to be an interesting year for lots of reasons, Altmann is content to keep his head down and keep moving forward with an eye to an extension come Oct. 22, when voters will see whether his estimations are correct.