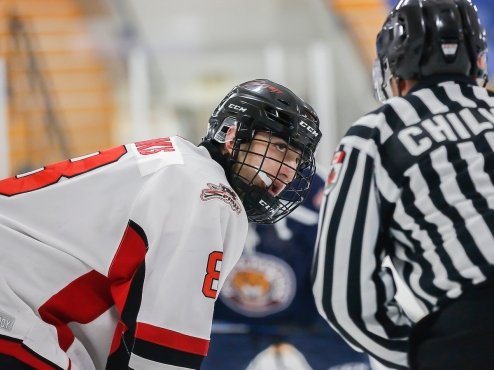 Kosta Manikis feels he’s at home when he’s on the ice.

So when he and his dad were sitting in the stands at the 2018 Canadian Junior Hockey League (CJHL) Prospects Game in Mississauga, Manikis turned to him and told him what the plans were for the 2019 NHL draft showcase.

“I told my dad I hope I’m in this next year,” said the former 17-year-old Stouffville Spirit centre, who is one of the 40 top 2019 NHL draft eligible players invited to this year’s top Jr. A prospect game being held Tuesday, Jan. 22 at in Okotoks, Alta.

“That was always a goal of mine since that game last year and I saw the atmosphere and what it is all about, so I just said, ‘Wow, what a big deal it is to be in this,'” continued Manikis, who was given a C rating (4-6 round) on the most recent NHL Central Scouting Players to Watch List. “I’m just going to go there and play my game. Work really hard and show everyone what I can do.

“You’re playing the best of the best, so you have to be one of the best.”

Having NHL scouts take notice of his game is something the young Toronto native says means a lot, but Manikis knows there’s still plenty of work to do ensure he can take his game to the next level.

“Obviously it’s something special to be recognized by the highest league in the world,” said the six-foot, 182-pound forward, who has recorded 15 goals and 21 assists for 36 points in 37 games with the Spirit this season. “It’s good to be on there, but I’ve got to stay on there and that’s the goal.

For Manikis, his focus continues to be on the ice and that now means helping the Jr. Canadiens win hockey games.

“I like to play a 200-foot game,” he said. “I’m a centreman, so I just stick to my game. Hopefully people in the stands like it, but when I play I’m not focused on all the outside noise. I just play my game.”

And part of that game includes playing with an edge. Manikis has racked up 92 minutes in penalties, the most of any Spirit player this season.

He points to Calgary Flames forward Matthew Tkachuk or Toronto Maple Leafs forward Nazem Kadri as players who do what it takes to get it done.

“I feel like when I’m being physical, I’m playing my best all the time,” said Manikis, a fifth-round pick of the Sudbury Wolves in the 2017 OHL Priority Selection who has decided to commit to the Clarkson University Golden Knights NCAA Division 1 hockey program. “I throw a hit or get under someone’s skin, I’m doing my job.

“I’m not a guy that’s going to go end-to-end all the time like that, so I think being a complete player you need to have a little bit of grit.”

While there are areas for improvement in Manikis’ game, Spirit assistant general manager Thayne Hallyburton sees him as a strong offensive player who has put up good numbers despite playing on a younger team.

“He’s a really gifted playmaker, who sees the ice really well,” Hallyburton said. “He needs to work a little bit on his finishing. He’s a real strong skater. Really physical and has a lot of bite.

“He’s a kid that doesn’t give up on pucks very easily, lots of second effort. He got an ‘A’ (assistant captain) this year and really could had the (captaincy). He’s a good leader in the room.”

The former Vaughan Kings minor midget ‘AAA’ player has continued to work on his play without the puck and much of his focus of improvement has been on the defensive side of the game.

“He’s bought into getting better,” Hallyburton said of Manikis. “He understands what he has to do to get to the next level. His play with the puck is really the one thing that missing from his game. Other than that, he’s really an all-around player.”

Manikis says his development over the past couple of seasons in Stouffville has been helped in a big way by coaches Rob Acton and Chris Porter, as well as former NHLer Keith Acton.

They could be tough on him, but it was all an effort to get the best out of him every game. Manikis says the Spirit organization has given him more opportunities than anyone can ask for.

“I played a lot for a 16-year-old,” he said of his rookie season when he posted nine goals and 19 assists in 47 games. “A lot of stuff happened. They got rid of older players and they gave me a chance right away.

“That gave me a lot of experience. I just felt real confident coming into this season because the year I had last year, playing all the time.”

Manikis is looking forward to the upcoming CJHL Prospects Game, especially after not getting an invite in early December to Team Canada East’s selection camp for the World Jr. A Challenge in Bonnyville, Alta.

He’s says he’s learned from the snub and it’s been all the motivation he’s needed when he steps on the ice.

“I got pissed off,” he said. “I said I want to prove everyone wrong. Maybe I feel I have done that a bit. Facing adversity is always good, because you learn from it. I’ve been facing it quite a bit.

“I guess things happen for a reason. Ever since then I’ve been putting up more points. Proving people wrong is something I love doing.”

photo: NHL draft prospect Kosta Manikis will be taking to the ice in this year’s CJHL Prospects Game, being held later this month in Okotos, Alta. The Toronto native has 15 goals and 21 assists for 36 points in 37 games with the Stouffville Spirit this season. Ray MacAloney/OHL Images.