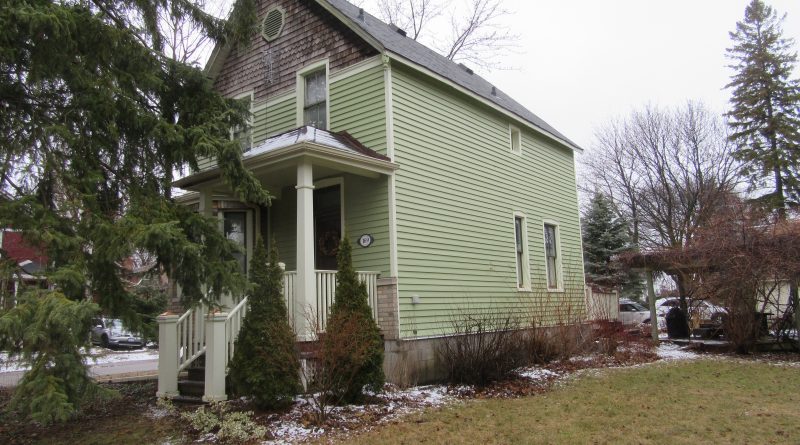 The house at 169 Harold Ave. was built in 1891 and is part of Plan 59 lot 125 located on the northeast corner of Harold Ave. and Albert St. As part of a heritage neighbourhood it is a municipally listed property.

By the time Oct. 1891 rolled around Mr. Booth had a mechanics lien from Joel Baker, who owned the local lumber yard, for $68.89. He cleared this, but followed with another lien on December 2 for an undisclosed amount. He cleared this when he sold the house a year later December 3, 1892. The amount he received was $675 from a Mr. Aaron Burkholder.

The house belongs next to the Neal sisters, Margaret and Joanna. Living with them was their widowed mother, Jane (86) and their widowed brother George (53). Joanna was employed as the house nurse for Dr. Ira Freel for many years. She was also president of the Garrett Mission Circle of the United Church.

On Wednesday, Sept. 15, 1926, Miss Mable Neal was united in marriage to Mr. Kerby Sibley of Lemonville. The wedding, one of simplicity, took place at this home. The surroundings were cheerfully decked with an array of flowers. Her matron of honour was her cousin Joanna Neal. As the newly married couple drove off they were followed by old shoes (a symbol of good luck).

Jane Neal was Stouffville’s oldest lady when she passed away on Jan. 9, 1927. She had just turned 91 in the fall of 1926. Mrs. Neal was always of a bright disposition ever ready for a passing joke. Many friends in town would stop by for a short chat. She was unable to walk outside owing to her advanced age. The funeral was from the home as was the custom back then and followed with burial in Salem Cemetery.

Her Brother George passed suddenly and with great shock to his friends in town. He died on Feb. 1, 1928. Just seven years previous he had retired to Stouffville due to ill health. He was a man of a kindly disposition and of sterling worth making friends on every side.

Joanna passed away on May 4th 1930 aged 45 and was buried in the Salem United Church Cemetery in the family plot.

Margaret retained the house until 1942 when she sold it to a Mr. Isaac Brubacher and his wife Cora for $1100.