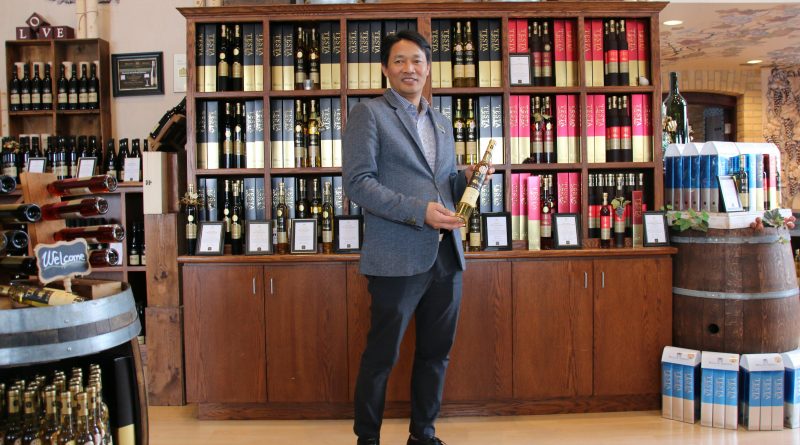 By now, most of us are glad to see the end of the cold, the snow and long, dark days of winter. But for Sheriden Huang and his team at Stouffville’s Willow Springs Winery, the cold is a reason to celebrate. Specifically, long stretches of temperatures between -10 and 12 degrees Celsius are best as they help to provide the basis for some of Ontario’s best ice wine. Willow Springs has been at the forefront of what has become a highly-regarded crop of icewines that have gained international acclaim and in Willow’s case, awards galore.

The wine is fine and pricey but with ice wines requiring about six to eight-times the grapes to produce the same amount as a typical table wine, it’s easy to understand why. It is not, however, easy to make and it takes all the wine-making know-how you can get to balance the grapes, soil and fermenting and then marketing processes to get the wine to tables all over the world.

Luckily, Huang, who, after a career in business and marketing decided to move his attention to something he loved in 2010 when he bought the budding winery from the Testa family, has lots of know-how to draw from.

Huang is clear that while he has become a student of the technical side of wine-making, his knowledge of wine was, at the time of purchase, largely confined to the tasting side of things. But thanks to good soil, the Testa’s old-country knowledge, boundless energy and a belief in what was being created there already, Willow Springs has flourished under his watch.

“I got a chance to learn about wine from different places in Europe,” says Huang says of his student days there where he caught the wine bug. When he came here, he was told Niagara Region was the place to be. But, he notes, “I came (to Willow Springs) many times before. I came for wine tastings.”

But even when he knew the business was up for sale, he found no one was lending money for agriculture enterprises. That was until he came across an Italian bank manager who was familiar with the Testa family operation and knew of the awards they’d begun to accumulate, starting with a bunch in the 2009 Royal Wine Competition including accolades for a Merlot, Vidal and Rose. That list has grown to include dozens more international accolades including more than 20 for their icewines alone, including the last five consecutive years. They were also the first York Region vineyard to get VQA certification and have earned recommendations from well-regarded wine writers like Tony Aspler.

The Testa clan is still involved with master winemaker Mario Testa personally supervising every step in the process. Huang has hired other Italian and Portuguese winemakers to ensure a depth of wine-making

knowledge not often found in these parts. The pairing of Testa’s wine-smarts and Huang’s business and marketing acumen are a good combination says Huang. Something, he says Mario Testa told him right from the beginning of their relationship.

Customer service is crucial to success too, and Huang proudly shows the results of surprise “Mystery Shopper” surveys he subjects the winery to via the Wine Country Ontario organization. It critiques everything from how the winery rates monthly on cleanliness, staff product knowledge, friendliness, “passion” for the product and even whether the staff recommend other local places for dining or other activities. All those and more check out with high marks (94/100) noted on the two pulled randomly for me to look at by Huang.

But while you will find their celebrated Pinot Noir or Vidal Icewine on fine tables in China, the US, UK and other European countries and, of course, locally, you won’t find it in LCBO stores. That, he says is by design. The business model of the LCBO yields only about 45 cents of every dollar for the winery and that is not sustainable says Huang. “If (a small winemaker) wants to survive through the LCBO you’re wasting your time.”

So, with over half of the inventory being exported, profits have improved. But the only way for domestic lovers of wine to experience the local magic of Willow wines is by joining one of the hundreds of wine tours that pass through the gates, or for locals, just drive to the winery at 5572 Bethesda Rd. just east of Ninth line.

In 2018, thousands of people did just that. Huang estimates a slight majority are from the GTA but a growing bulk come from international destinations for wine tasting, but it has also become a popular destination for weddings and corporate events. Extensive marketing, wine tours, exports and friendly in-house service help move close to 100,000 bottles of wine per year and Huang notes that part of what sells is the area.

Chinese wine tourists have especially come to appreciate Willow Springs brands, and Huang notes that while they do make brochures in Chinese, they do not make special Chinese-language labels for exported products saying the cache of coming from a small-town English-speaking Canadian vineyard based on old-world expertise is a key value proposition. “They know we have very strict regulations. We’re more-safe (than other countries) and follow the rules of VQA,” he notes. Huang also says that not only is the wine local but so too is much of the food used for events, sourcing what they can locally.

That key connection to the local area is also a point of pride for Huang who proudly shows off a wall of plaques and certificates from teams, events and organizations he has sponsored over the last few years. He takes a breath and seems to reflect on his place at Willow Springs before concluding, “It’s a tough business, but it’s a fun one too.

For more info on the winery, you can go to willowspringswinery.com

Photo: Sheriden Huang of Willow Spring Winery shows off some of his award-winning wines that have brought acclaim at home and abroad.