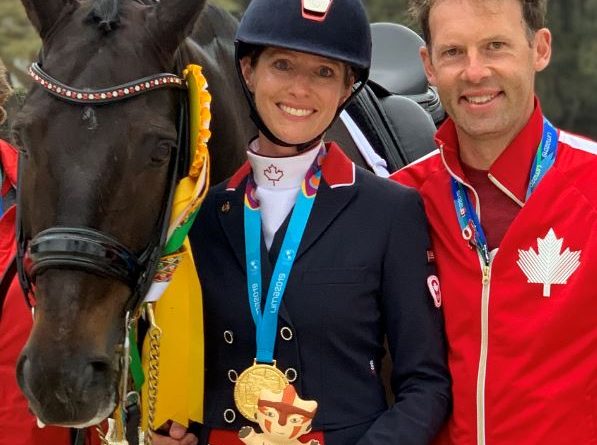 For the first time in 28 years, the Canadian team have brought home gold for dressage at the recent Pan Am Games in Lima, Peru.

Team member Tina Irwin, who lives and practices in Stouffville, was instrumental in the win, which had the added bonus of securing the Canadian team a spot at the upcoming Olympic Games. Tina and her horse Laurencio also won an individual silver medal for dressage (a type of equestrian riding) at the Pan Am.

Irwin went into the Pan Am Games feeling pretty confident about her team’s chances.

“The team members and I knew we could do it,” she said. “We are capable, and we were ecstatic when we accomplished the team win because the United States have won team gold in the previous six Pan Am Games.”

Irwi further explained that the team win was essential to securing a spot for Canada to compete in dressage at the 2020 Olympics in Tokyo.

“In equestrian, after each Olympics, we have to be in the top percentage of games in order to qualify for the next Olympics,” she explained. “This Pan Am Games was the last chance for our dressage team. We had to win a medal, not necessarily gold, in order to get a spot at the Olympics.”

“This means that Canada qualifies to compete in dressage at the Olympics but it doesn’t necessarily mean the specific team members who competed at Pan Am qualify,” Irwin was keen to point out. “All the athletes start on January 1, 2020 trying out for Tokyo. So the Pan Am team win was a huge accomplishment because it opened the door for all Canadian dressage athletes to possibly go to the Olympics.”

Irwin was also thrilled to bring home her individual silver medal, which, like all her medals, was a joint effort with her horse.

“Laurencio has been performing amazingly all season and for the last two years,” she said. “We had a really good track record going into the Pan Am.”

“I knew Laurencio was ‘the one’ to focus on for competition the moment I sat on him,” added Irwin. “My husband and coach, Jaimey, and I bought him in Germany eight years ago. This was right after the 2011 Pan Am Games (which the Canadian team won a silver in with Irwin competing with a different horse). We trotted a couple of steps together and it was an amazing feeling, something special. Laurencio is now 12, and we’ve ridden him up through the levels of dressage; we have a really strong relationship.”

“One of Laurencio’s strong qualities is his temperament,” she added. “He is an exceptional horse in terms of movement, but he also has a mind that can adjust to any atmosphere. He is consistent and steady, and easy to train. These are all the right ingredients to be a top horse.

“Also, as a competition horse, he has to be good with travelling and adapting well to new situations. For example, prior to going to Lima, we were at a training camp in Florida where it was very hot. Lima, in contrast, was a cool 17 degrees. It was hard to shift from hot to cool but Laurencio adapted very well because he is so fit.”

Irwin credits Jaimey as playing a huge part in her success as a rider.

“Obviously it is a massive team effort and you only see the finished product, but so many years of training and coaching goes on behind the scenes. I wouldn’t be where I am without him.”

In addition to competing, Irwin and her husband Jaimey offer training and lessons in Stouffville, for the serious dressage enthusiast. Find out more at www.teamirwindressage.com.

[Photo credit: Tina and Jaimey Irwin (pictured along with their horse, Laurencio)].