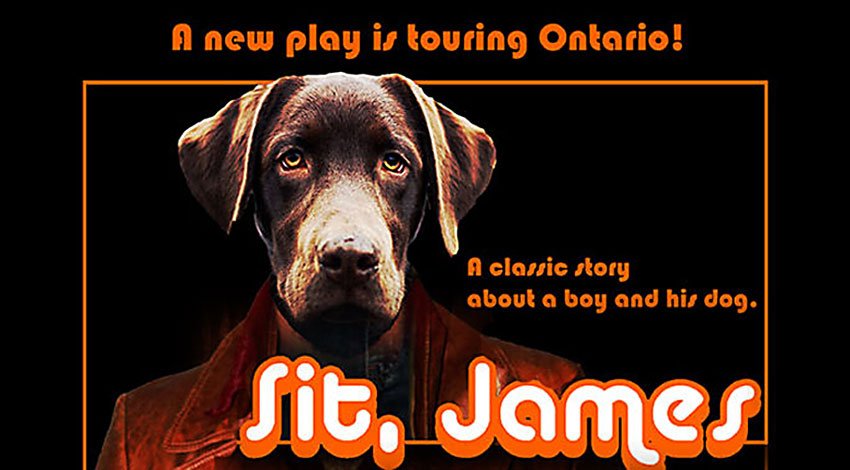 Sometimes a touch of the weird is good. Sit, James, presented by the professional touring company, Proscenium Club, has oddity in spades and it’s at 19 on the Park in November.

It’s the story of James, a lonely young man who lives with his brother in a rundown farmhouse. The tale also includes invading cult members, a romantic interest (in his cousin, unfortunately) and an invisible dog. The growing tension between the brothers in their world full of secrecy, anger and shame begins to buckle after 15 years of togetherness.

Proscenium Club is also known for their hit production, Life and Death of John the Milkman, which toured Ontario and making a stop in Stouffville last year. The group of emerging artists prides themselves on producing professional Canadian theatre works, performed by artists from Northern Ontario, but also includes Kelsey Ruhl, a Stouffville native, who moved north to pursue her acting career. Catch this original theatre production at 19 on Nov. 2 and 3.

The film series continues in November and, for those who enjoy a good time, the 19 on the Park theatre screens Mamma Mia: Here we go again! on Nov. 1. The familiar cast will make you dance in the aisles.

On Nov. 7, the acclaimed documentary, Won’t You Be My Neighbor, about famed children’s entertainer Mr. Rogers, hits the screen. The film carries a strong message of diversity and acceptance for every generation.

Nov. 16 and 17 bring two titles to the screen: Mission Impossible: Fallout and the new Disney version of the traditional Pooh story, Christopher Robin. Two final screenings of Film Festival Gem titles close out the month with Don’t Worry, He Won’t Get Far On Foot and On Chesil Beach, both known for their multiple film festival nominations and wins around the world.

Looking forward to the holiday season, on Nov. 24, 19 on the Park has paired up with the Northern Spirit Big Band, a group comprised of 20 musicians with the intent to bring gospel-infused big band music to the stage. They play the standards of the big band era, popular ballads and select titles of classical music. But, at this time of year, their show, Anticipating Christmas, brings a little holiday flair to their repertoire.