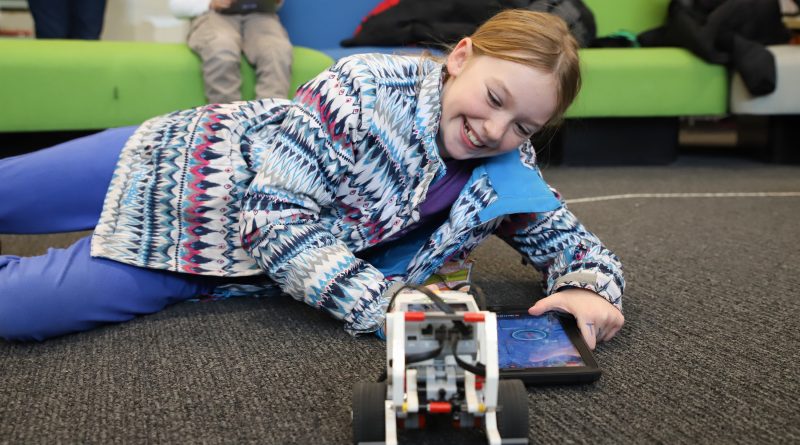 The Whitchurch-Stouffville Public Library was awarded first place in the Larry Moore Challenge at the Ontario Library Association Super Conference on Feb. 1.

The Larry Moore challenge is a leadership competition that encourages innovation in libraries across Canada. This year’s award was quite significant as the competition celebrated its 25th anniversary.

Our local library entered the challenge with its new STEAM Certificate Program which includes stations throughout the library showcasing the various aspect of STEAM (Science, Technology, Engineering, Arts and Math).

Increasingly, STEAM skills are becoming more important in the 21st century workforce.  “In today’s world, new skill sets are expected for almost all types of work. Teamwork across disciplines is the new normal,” said Margaret Wallace, CEO of Whitchurch-Stouffville Public Library.  “One example would be an architect, who uses technology, engineering, art and mathematics in their job as part of a project team creating beautiful and functional structures.”  The library is poised to become a STEAM hub with its slate of programming that focuses on all aspects of STEAM learning.

Information on the STEAM Certificate Program is available on the library’s website at wsplibrary.ca/STEAM.

The first place win includes $5,000 which the library will use to further enhance the new STEAM certificate program.

The upcoming March Break offers the WSPL a chance to showcase programs contributing to the new STEAM Certificate Program. With the generous support of the Stouffville Lions Club, the library is bringing in Mad Science for two programs, one creating a model insect and one making slime. Library staff are running programs that will have children learning design for 3D printing, coding for Lego, and coding for Ozobots. Staff-run programs on crafts from clock decorating to assembling beanbag animals will allow children to work on their artistic skills. Hands-on activities include making slime, understanding the physics of parachutes, and simply food preparation.

For Teens, the library is offering programs on game building, 3D printing, getting to know a wide range of technology tools, and the creativity of painting.

“Integrating the skills represented by the letters of STEAM prepare the young people of our community for a wide-range of future opportunities” says library CEO Margaret Wallace. “We are pleased to be a space where children and teens have the opportunity to gain these important skills.”

Photo: The Whitchurch-Stouffville Public Library is poised to become a STEAM hub with its slate of programming that focuses on all aspects of STEAM learning.