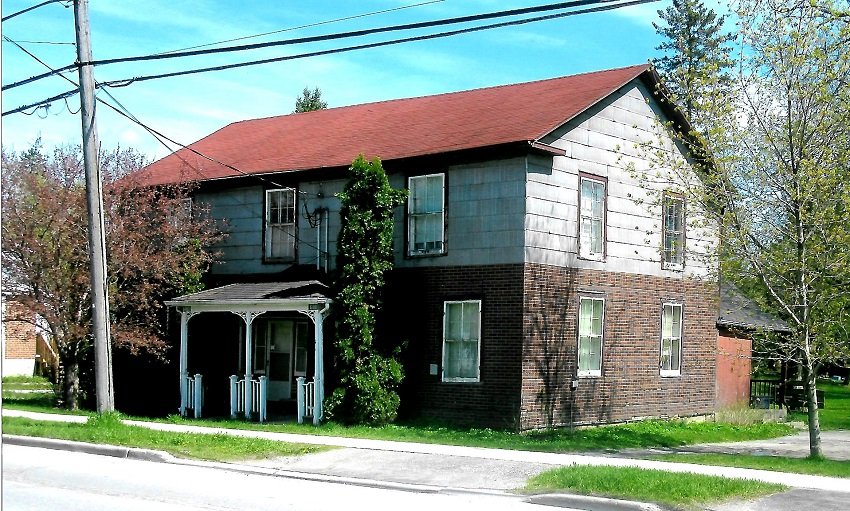 At a time long ago, the Lemonville Hotel was a going concern. The hotel was originally located in Lemonville. But for over 140 years, it has maintained an inconspicuous presence on Main St. Stouffville

The Lemonville hotel was once complete with shutters and an ornate verandah which had gingerbread details. The brick chimneys that were located at each end of the hotel, have now been removed. The building dates from c. 1840. This means it is a pre-Confederation building. This structure captures the history of both rural Whitchurch and the urban Stouffville in one building. It is also one of the oldest local buildings.

The main entrance to the hotel side has a splendid entry. This includes a transom light and two side lights with panels below. It would indicate a very early built design. Once you step through the heavy front door made of two-inch lumber plus mouldings, you enter the front hall which is very wide for public use. The staircase is wide making the hall, eight feet overall. The railing and newel posts reflect very simple curve design.

The large upstairs windows are six over six and measure four feet wide by six feet tall. The exterior cladding shows a reddish Insulbrick once popular in the 1930s. Just hidden under this layer is the original wood horizontal siding. Apparently, there are still holes in the floor where beer pipes ran and the floor was distinctly worn where the bar used to be located.

The structure of this building is called plank on plank construction. Each wall is made of 6 x ¾ inch thick planks laid flat on top of each other. Included is the main interior wall which was made the same way. This structural strength was the reason it survived the move from the 7th Con (Lemonville) to Main St. Stouffville. Oral history has recounted that during the move it was stopped at the corner of Main and the Ninth Line for some time. This move was before the train came to town in 1871. The building is located now on Lot 1 Block “C” of Plan 51. This old plan dates back to 1855 for the south side of Main St. It was formerly part of Markham Township, as Stouffville was not incorporated until 1877.

The current use today is two private residences. This is a building well worthy of heritage designation.