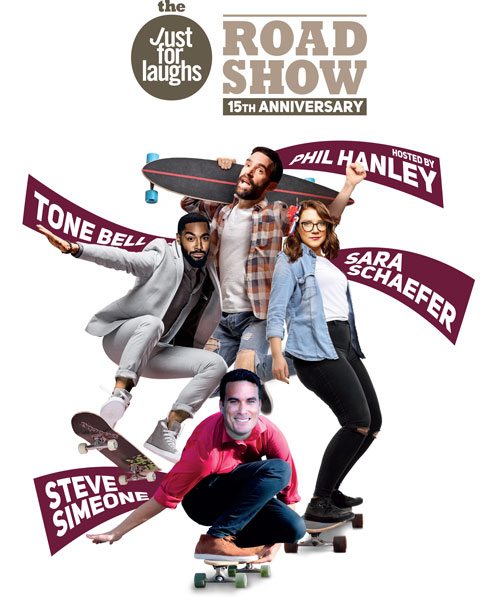 Just For Laughs is bringing more of its funniest alumni to Markham in the 15th anniversary edition of the road show, hosted by Phil Hanley and starring Tone Bell, Sara Schaefer and Steve Simeone.

Phil Hanley began stand-up comedy by performing at open mics around Vancouver, BC, often in-between bands at music venues. Since settling in the U.S., Hanley has become a regular at New York City’s renowned Comedy Cellar. He has also appeared on The Pete Holmes Show, John Oliver’s New York Stand-up Show, and twice on The Late Late Show With Craig Ferguson. In the past year, he has appeared on Late Night With Seth Meyers and @midnight. His Comedy Central stand-up special, The Half Hour, also aired in 2016 and he is the lead actor in the 2017 film Sundowners, alongside Tim Heidecker.

Actor-comedian Tone Bell can be seen whenever and wherever you want as he stars opposite Kathy Bates on Netflix’s original comedy series Disjointed. Bell has received critical praise for his depiction of Carter, an Iraq war veteran suffering from PTSD who discovers the healing power of cannabis. Previously. Bell starred on the half-hour comedy series Truth Be Told, Bad Judge and Whitney for NBC. An accomplished stand-up, who regularly tours nationwide, Bell will be shooting his one-hour comedy special early next year. He is currently developing a show, at FX, based on his comedic observations on contemporary issues surrounding “schisms” in the U.S.  His half-hour comedy special can currently be seen on Comedy Central and CC.com.

Sara Schaefer is a critically acclaimed stand-up comedian, writer, and producer currently based in Los Angeles. She was recently the co-host of MTV’s late night show Nikki & Sara Live. Schaefer has appeared on @midnight, John Oliver’s New York Stand-Up Show, Late Night with Jimmy Fallon, Best Week Ever and Inside Amy Schumer. She won two Emmys for her work at Late Night with Jimmy Fallon, and has written for BestWeekEver.tv and Who Wants to Be A Millionaire. Schaefer recently wrote, produced, and starred in her new web series, Day Job. Her new radio show, Lies, produced by WNYC, will debut this summer. Schaefer is also currently a staff writer on Not Safe with Nikki Glaser.

Steve Simeone made his Comedy Central debut on Gabriel Iglesias’ Stand Up Revolution in 2014. This year, he returns to Comedy Central on Ari Shaffir’s This is Not Happening storytelling show. Simeone developed his unique high-energy approach to storytelling by competing for laughs with his two brothers around the family dinner table. His positive, family-friendly approach to comedy has delighted audiences around the world and made him a paid regular at Hollywood’s most prestigious comedy clubs including The Comedy Store, Hollywood Improv and Laugh Factory. Tune into Simeone’s popular podcast Good Times or catch him on Joey Diaz’s The Church of What’s Happening Now and become one of his buddies.