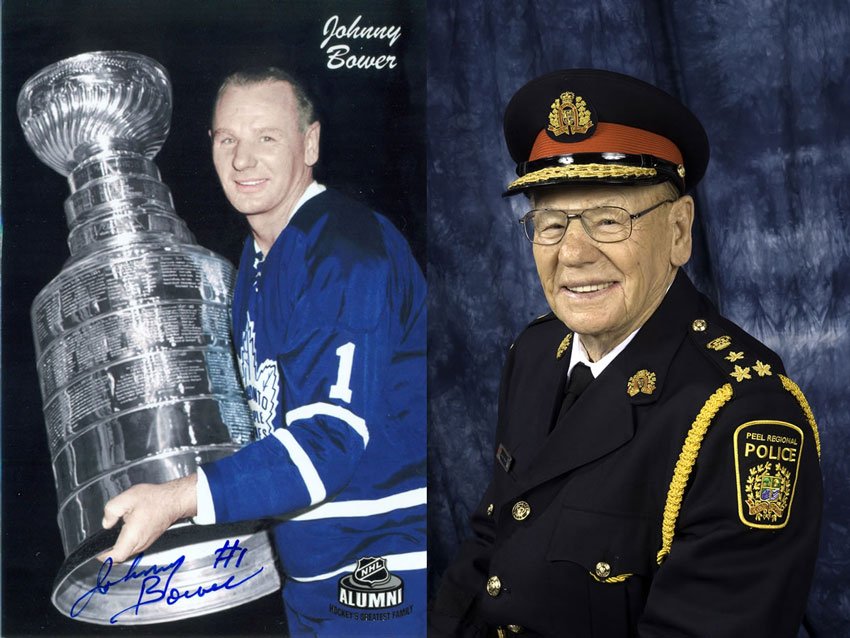 Toronto Maple Leafs legend Johnny Bower died on Dec. 26 at Credit Valley Hospital following a brief bout with pneumonia. He was 93. Bower was a prominent Mississauga resident for about 30 years and had a park in the city named in his honour.

Nicknamed the China Wall, Bower played goalie for the Leafs from 1959-79 and was part of four Stanley Cup-winning teams in the 60s. He was inducted into the Hockey Hall of Fame in 1976. Bower recorded a song called Honky (The Christmas Goose) in 1965. Based on a children’s book written by Scott Young, it received considerable airplay as a children’s song but the record also became popular on a Toronto rock and roll radio station.

Much was made of Bower’s actual age during his career with the Leafs. Along with the late Terry Sawchuk, Bower provided the team with steady netminding. He wore jersey number one, taking it over from the great Turk Broda, and was arguably number one in the hearts of Maple Leaf fans of all ages. Following his retirement, Bower worked 20 years for the Leafs as a scout and goaltender coach and became a goodwill ambassador for the team in 1990.

Bower is survived by his wife of 69 years, Nancy, along with children John Jr., Cindy and Barbara, eight grandchildren and six great-grandchildren.

The Bowers chose to live in Mississauga, when deciding to downsize, and chose a condominium in Streetsville on Counsel Ring Road. They moved to Meadowvale in the mid-90s after finding a bungalow, which was also ideal because it backed onto a marsh, a feature Bower and his wife embraced.

Bower gave freely of his time to many charities. He was a longtime spokesperson for the Peel Children’s Safety Village and served as honourary chief of police in Peel Region since 2003. He was probably Mississauga’s most recognized public figure, along with former mayor Hazel McCallion and Don Cherry.

“Hazel always reminded him of how popular he was,” Bower’s grandson, John III, said. “I had the opportunity of being with him on a bus when we were going to the Bell Centre in Montreal for the public viewing of Jean Beliveau before his funeral. Grandpa said to me, ‘You don’t think they’ll do the same thing for me, do you?’ I chuckled and said, ‘Are you kidding me? Of course there will be this kind of reaction because you are the Jean Beliveau of the Maple Leafs.’ He was kind of caught off guard by that.

“He would always take time to pose for pictures and sign everything. It was just a part of his DNA. He felt he was privileged to have been a hockey player. It wasn’t a right, it wasn’t just a career, it was a choice, and with that came certain kinds of responsibilities, and he never shied away from that, but I don’t think it ever dawned on him how many people he touched.”

Bower’s grandson said the person who would suffer his grandfather’s loss the most outside of the family was McCallion.

“Hazel and grandpa became really good friends over the years,” he said. “Obviously she’s a big hockey nut and just a wonderful woman who did so many great things for the City of Mississauga but was also just a great friend of my grandparents. I know this will definitely touch her as well as the City of Mississauga. It has been great to my grandparents over the years.”

Cherry, who knew Bower as a player dating back to 1955 and often bumped into him at events in Mississauga, said the Leaf great never forgot his hockey roots.

“Anything to help people, there was Johnny Bower,” he said. “He was in the American Hockey League for so long and he acted like a minor leaguer in a big city. I think people liked him that way. He never thought of himself as a superstar, which he was. He just tried to be an ordinary guy. I think that’s why people liked him when they met him – how humble he was and how nice he was.

“He didn’t think he was a big shot. Here he was a Hall of Famer, won the Vezina Trophy (as the best goaltender), four Stanley Cups, there’s nothing else he could have won as a goaltender and he still wondered whether anyone would really honour him. They sure are honouring him now.

On her Twitter account, Mississauga Mayor Bonnie Crombie wrote, “Sad to hear of the passing of Maple Leafs great and Mississauga legend, Johnny Bower. He had a distinguished career on and off the ice, giving back to his community in many ways. My thoughts, prayers and condolences and those of all Mississauga residents are with his family and friends.”

Brendan Shanahan, Maple Leafs president, issued a statement on behalf of the club saying: “The entire Toronto Maple Leaf organization is deeply saddened following the passing of Johnny Bower. Johnny was beloved by so many for much more than his Hall of Fame credentials as a player. It was his generosity of spirit, kindness and passion for people that made him a legend at life. The Toronto Maple Leafs and our fans are deeply indebted to Johnny for all he gave to us and taught us over the years. We will miss him dearly, but we know that his presence will forever be felt by our club and our city. There may not be a more loved Toronto Maple Leaf, nor a former player, who loved them as much back.”

Bower had his jersey retired by the Leafs in 2016 and was listed seventh on the team’s all-time top 100 players.

Gary Bettman, NHL commissioner, remarked: “There is so much to appreciate in Johnny Bower’s accomplishments on the ice – including the four Stanley Cups and membership in the Hockey Hall of Fame – and yet there was so much more to the man who served his sport, his country and his community with such distinction. Johnny Bower enriched us all by sharing the pure joy he felt for the game he played and for the men who played it, with him and against him. It was a personal privilege to know him, a delight to be in his presence and an honor to celebrate him as one of the 100 greatest players in NHL history. Johnny Bower was a bright light of our sport, a light that will shine forever. As the NHL family grieves his loss, we send heartfelt condolences and comfort to his wife, Nancy, his family and his countless friends inside and outside the game.”

The family is holding a private funeral with the Toronto Maple Leafs set to hold “a celebration of life” at the Air Canada Centre. The public is invited to the ceremony, which starts at 3 p.m. on Jan. 3. The doors will open at 2 p.m. with gate 1 as the only point of entry. Seating in the stands will be on a first-come basis. The floor will be reserved for family, special guests, current players, alumni and officials.