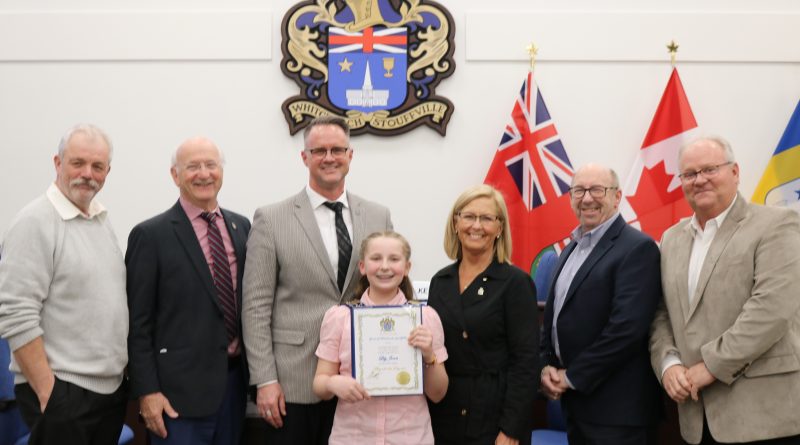 Do you ever wonder what it would be like to be the local mayor?

Well, eleven-year-old Lily Jones was the lucky winner of this year’s Stouffville Mayor for the Day contest and she got to help fill the mayor’s role for the day on March 3rd.

First she was picked up from Barbara Reid Public School in a fire truck, where she received an epic send-off by her classmates and fellow Grade 6 students that included a symphony of posters, cheering and clapping.

From there, Mayor Iain Lovatt escorted her on several tours of town facilities including the Operations Centre, Fire Station 51, the Leisure Centre, the Library and Town Hall. Following her dinner of choice in the mayor’s office, she ended her term as mayor by opening the evening council meeting while sitting in the mayor’s chair.

“Lily is a firecracker! She is the exact reason why we began this contest last year,” Lovatt said. “Engaging with Stouffville’s youth is key to helping shape the future of our town. Lily’s essay was incredibly well written out and focused on improving Stouffville’s environmental sustainability – one suggestion she had included having high school students achieve their volunteer hours by going door-to-door helping to educate residents on how to properly recycle…talk about well-thought out.”

“I have learned so much new and interesting information about the many pieces that make our town run,” Jones said. “I am very grateful for the experiences I had as Stouffville’s Mayor for the Day.”

Open to Whitchurch-Stouffville students in grades 5-7, the Mayor for the Day contest launched in late January and gave students an opportunity to share their ideas of how to make Stouffville an even better place to live by either submitting an essay or a 3-minute video.