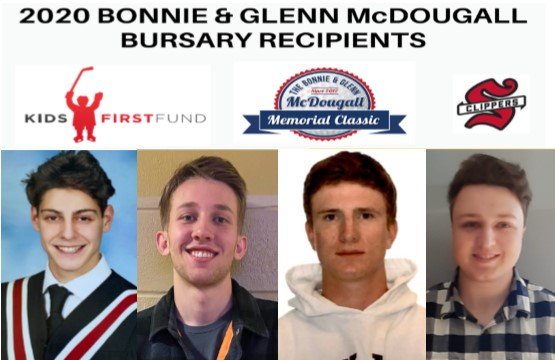 Four Stouffville hockey players are the 2020 recipients of a third annual bursary program launched in the community through the Whitchurch-Stouffville Minor Hockey Association and Stouffville’s Kids First Fund.

The players received financial awards from the Bonnie and Glenn McDougall Bursary fund.

“All the applicants have mentored athletes and students at school, in the community, within the WSMHA and their hockey team,” said Peter Harmsen of the bursary selection committee. “All four juggled school, sports, time with family and friends, work and still found time to volunteer in the community.”

Funds for the bursary were donated from a popular golf tournament run by former Stouffville minor hockey players Ian, Scott and Devon McDougall in memory of their parents – Bonnie and Glenn. The tournament was not held this year because of Covid-19.

The bursary is an off-shoot of Stouffville’s Kids First Fund Committee, which has assisted more than 130 players whose families have had difficulty with the cost of minor hockey during the past nine years.

“In 2012, the Kids First Committee was wondering how we could generate the financial resources to sustain the program,” Harmsen said. “Due to the tremendous generosity of the community, the available funds continued to grow.”

“We were very honoured to know the families of Ryan and Brent wanted to assist the fund and enrich the lives of young hockey players in their home community,” Harmsen said.

For more information on the Kids First Fund or the Bonnie and Glenn McDougall Bursary, email [email protected] or call 905-642-2835.