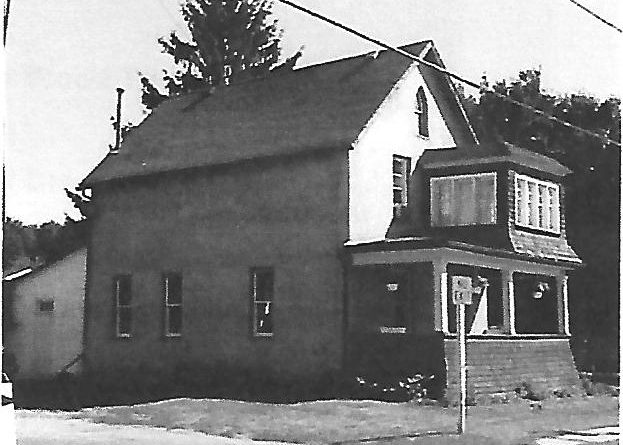 Most of the current local people in this neighbourhood know this house as the former home of Herbert and Florence Yakeley.

We will come back to them later.

Chappell was a market gardener and grew fruit and vegetables. He was married to Emma E. Abbs on February 1, 1882. Since that time they lived in Stouffville. The family included two daughters, Lydia Mae born in 1884 and her sister Mary “Elizabeth” born in 1892. Emma passed away in 1916. Chappell died in 1920.

Lydia Chappell married Daniel McConnochie on August 1, 1905. Daniel was a section man working for the railroad. He would walk the few blocks to the station from his home. The family included three children, Allan born 1909 and Robert (taking grandpa’s name) and a sister Daisy, Mrs. Samuel Smith of Toronto born 1906. Mary E. sold the home to her sister, Lydia McConnochie for $1500 on August 1, 1923.

The house built here was made of concrete walls on the exterior and was framed up with pine boards on the exterior of the studs. When the concrete was applied, it was fastened to the house with six-inch common nails, which helped the concrete to stay in place. It certainly was done well as it stood the test of time lasting for many years.

You may ask why concrete it seems strange. Well before the turn of the century, wooden frame homes burnt down. Shortly after, the fire insurance people thought to increase the rates. At this time people made the choice to cover the wood exterior with a variety of materials like tin panels, stucco and brick. These are shown on the fire maps of town in different colours.

Herbert Yakeley purchased the old McConnochie place on December 4, 1950. He was working for Henry Ogden & Sons. The sale was written up as an “Agreement.” A few years later on August 26, 1959, a payment was made for $4,500. His wife Florence was from Ringwood and the daughter of Ed Brownsberger. Herbert and Florence raised their two sons and daughter in this house. Their children: Rick, Arlene and Ron, were likely some of the first students going to Orchard Park school.

The home now looks different with many upgrades. Improvements included replacing brick where the concrete once was, removing the old woodshed on the north for a lovely rear yard porch and deck and adding a wing to the east which looks like it was always there. Even the more recent garage ties the theme together well.