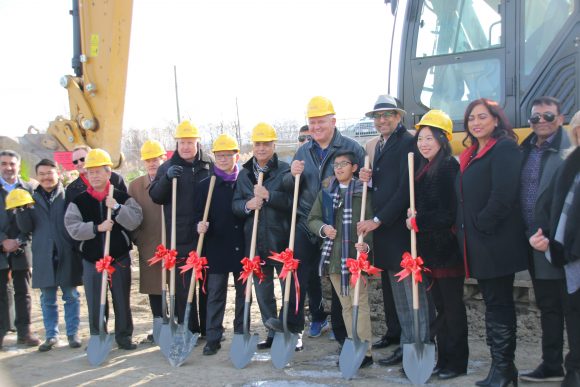 Local developer Flato Developments, who was responsible for the popular Arthouse Condos on Markham Rd., continues its focus on arts and culture-themed residences with a new project entitled Canvas on the Rouge.

The 111 unit, state-of-the-art condominium will be situated on the West side of Ninth Line, just north of Donald Cousen

s Parkway. Touting it’s connection with nature (the Rouge Park is literally right across the road) Flato president Shakir Rehmatullah and members of city council were joined by some of the first buyers in the project to help break ground for their home on a crisp late-autumn day.

Mayor Frank Scarpitti was effusive in his praise not only for Flato’s determination to bring new and enlightened living to the northern reaches of the city, but the amenities the city has to offer residents who will begin moving in the next year or so. Canvas on the Rouge condos is now over 70 per cent sold and construction has started.

Scarpitti noted the vibrant Cornell Community Centre, but also the beautiful parkland that will remain undeveloped and kept for the use and view of Canvas residents.

“Flato has been focused on developing master-planned communities in Ontario for over a decade,” Rehmatullah added. “Markham is an incredible location for growing families,which is why we’ve designed a condominium project that appeals to them. Regardless of the size of your family, there’s truly something for everyone.”

Rehmatullah takes pride in supporting communites where he builds homes. Locally, he has provided substantial financial support to Markham Stouffville Hospital (MSH) and Flato Markham Theatre. His company obtained naming rights to the local theatre about seven years ago and recently the naming rights for the MSH Cancer Clinic.

Photo: Flato Developments president Shakir Rehmatullah (in fedora) is joined by Markham Mayor Frank Scarpitti and members of council for the groundbreaking of Flato’s Canvas on the Rouge condominium.