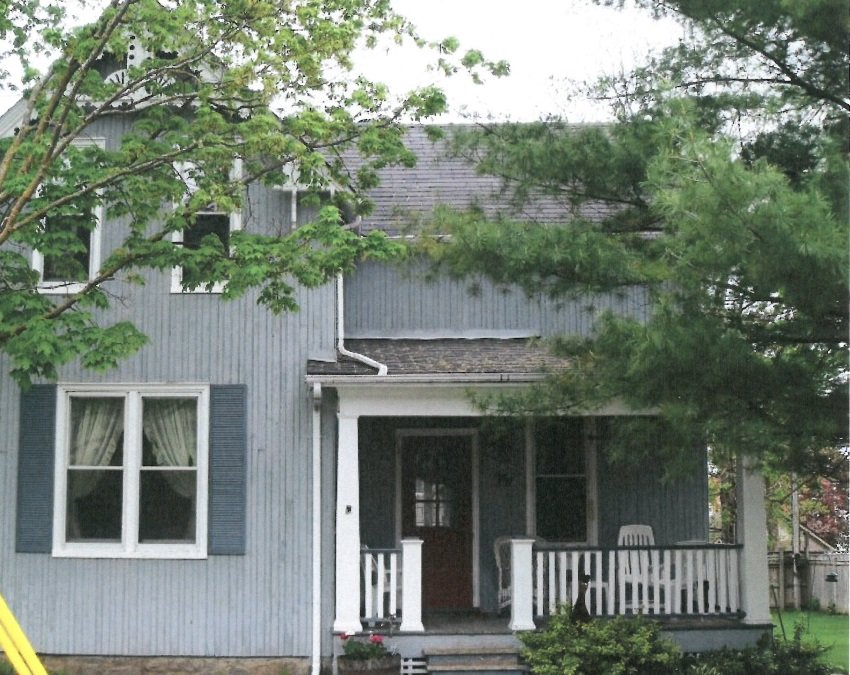 A relaxing walk on the back streets of the west end will give way to the discovery of this simple farmhouse. It is located on its original site close to the street amongst other heritage homes. This house was built by Jabez Johnson, just after the building boom of the 1880s. It is believed to be the only home built by a Quaker in the village of Stouffville.

Johnson was listed as a carpenter in the 1851 Canada West census. He was born in Canada in 1818.

He was first married to Hannah W. Lundy. They had seven children, but only three survived the harsh pioneer life with few medical aids. His second wife was Sarah Ann Walks, who had been married to Henry Widdifield Willson.

Johnson farmed a thirty-acre parcel of land in the northern part of Whitchurch. It was part of the Quaker community near Pine Orchard. He auctioned off his farm stock, implements and hay on Feb. 28, 1891. He built the home in the village west end in 1893, shortly after he purchased the lots for $75.

Fockler was born in 1841 on the family homestead in Bloomington. He farmed there until he retired and came to town. It was here he continued his interest in local affairs, serving a few years on Stouffville Council.

Fockler passed away in 1928, but Mrs. Delilah Fockler continued for ten more years almost reaching the century mark. She was 96 and the second eldest person in Stouffville when she died. As we celebrate Canada 150, let’s stop to think that she was born in the sixth year of Queen Victoria. She lived through the almost complete reign of one queen and three kings and lastly King George VI.

The Fockler family estate sold the property to Percy Brillinger and his wife Flossie for $1,100 in 1938.

Brillinger put on a few touches that would bring the residence up to date and then used the house as a rental income property.

Flossie was born in Ingersoll in 1887 and came to town to work in Mrs. Wilson’s Millinery shop. She married Percy Brillinger on Jan. 14, 1914. She soon retired from the millinery shop.

As you finish your review of this simple home, look for the carved wooden roof fascia in the upper gables which are well preserved.