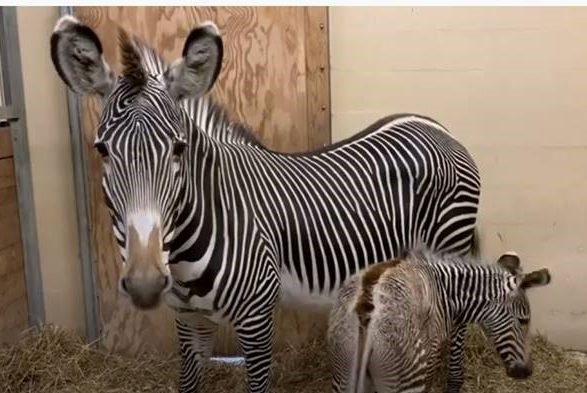 The Toronto Zoo has announced that Tori, a ten-year-old female endangered Grevy’s zebra (Equus grevyi), gave birth to a healthy foal in the early morning hours on Tuesday December 1, 2020 weighing 52.1 kilograms… and it’s a boy.

This is the fourth foal for mom Tori and the fifth for dad Jake, a thirteen-year-old male. This foal, born as part of the Grevy’s Zebra Species Survival Plan (SSP), will help to increase Jake’s underrepresented genetics within the population. Both mom and foal are doing well.

“We are so pleased to welcome this healthy and energetic foal to your Toronto Zoo and be contributing to the population of this endangered species,” says Dolf DeJong, CEO, Toronto Zoo. “With only 3000 individuals remaining in the wild, this is a great example of the critical work done by our world class wildlife care team at the Toronto Zoo to protect this species.”

The Grevy’s zebra has been listed as endangered by the International Union for Conservation and Nature (IUCN) for decades. Habitat loss, competition with livestock, and poaching are their primary threats.

The Toronto Zoo is part of the AZA Grevy’s Zebra Species Survival Plan (SSP), building our understanding of these incredible animals and supporting field conservation efforts for the species.

To find out how you can support the endangered Grevy’s zebra and other wildlife conservation work at your Toronto Zoo, CLICK HERE.