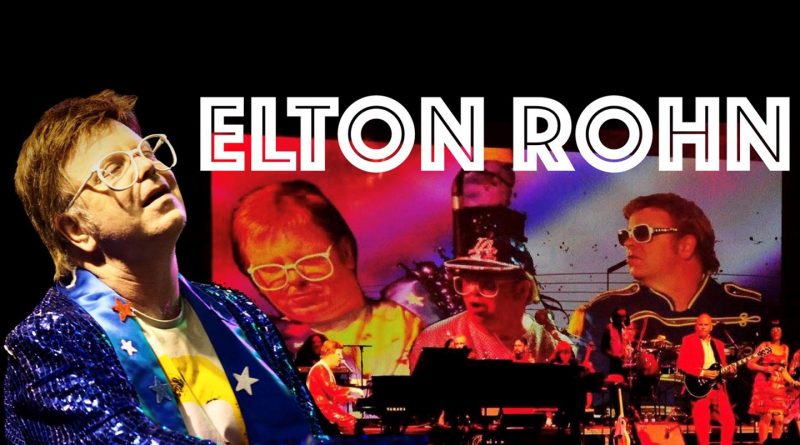 In 1969, Reginald Dwight was introduced to Bernie Taupin while they both were trying to get the same songwriting job at Liberty Records. Six months later, Dwight was performing songs they wrote together under the name Elton John.

Similarly, when record exec turned performer Ron Camilleri put down his guitar one night to spontaneously try a shouted request from the crowd at his well-rehearsed new band’s show, a brand new career emerged.

The request was for an Elton John song. The crowd loved it, so they played another from John’s catalogue and then another. It wasn’t long before the Elton John tribute act, Elton Rohn, was born.

This faithful tribute to the iconic composer and performer of hits like Crocodile Rock, Rocket Man, Bennie and the Jets, Goodbye Yellow Brick Road, Don’t Let the Sun Go Down on Me, Saturday Night’s Alright for Fighting, The Bitch is Back, Your Song and dozens more comes to the Flato Markham Theatre on April 10.

No stranger to the music business, Camilleri was the director of Columbia Records Canada during its most successful period in the 1990s and is now a successful composer for television. He knew from experience there was a way to build on the excitement he saw in the audience every time he performed Elton John’s material.

“The next thing I know,” Camilleri continues, “I’m playing the Sound of Music festival in Burlington as Elton Rohn and I’m fielding requests to play from all over … including Las Vegas.”

The Las Vegas show was a bit of a do-or-die risk for the group. They had been asked to headline at an international convention of hardcore Elton John fans. Wowing that crowd would certainly bring more bookings, but an off night could ruin their growing reputation in a hurry.

As if the pressure of the show wasn’t enough, the performance was attended by members of Elton John’s longtime backing band, guitarist Davey Johnstone and drummer Nigel Olsson. Ultimately, it was Elton John’s own band that sealed Elton Rohn’s fate.

“Davey said, ‘You are probably the best 70s Elton in the world,’” says Camileri. “That’s what they told us. They love us.”

After Vegas, as the show became more successful, Camilleri invested more time, effort, and money into it. Today, the show features high definition video projections. Some shows feature a larger band and songs with a string section and the band plays hundreds of shows a year throughout North America.

“Every show is different,” explains Camilleri. “The first time in a market we usually go in as a five-piece and that just rocks. Just Elton like used to do through the 70s.”

Camilleri has found that once he enters a market with the smaller show, there is almost always a request that comes for something more next time. So, Elton Rohn returns with a bigger band, then a bigger show and so on. That is precisely what happened in Markham. The band has been a mainstay of the Thursday Nights at the Bandstand series in Unionville since 2015.

“We love it there,” says Camilleri. “Markham’s a blast.”

With audiences packing Unionville Main Street to see them every August, it seemed appropriate to bring the full show in to the Theatre. They come to Markham, this time, with the 11-piece band, complete with a string quartet and a production complete with costumes and video projections.

“It becomes more finesse at that point.” he continues. “It still rocks, but there is much more to it.”

As for the exact setlist, Camilleri has a unique solution to the problem of pairing down Elton’s career into two hours.

“There are four hours of hits alone,” he says when asked how he picks material. “This is why we usually take requests.”

Audience members can email requests via the band’s website, eltonrohn.com. The band will go through them and build the set from there. When asked what else the audience can expect, Camilleri doesn’t hesitate or mince words.

“We take you back to Elton at his peak,” he says with confidence. “We hit the high notes and bring the energy of a classic Elton John concert.”