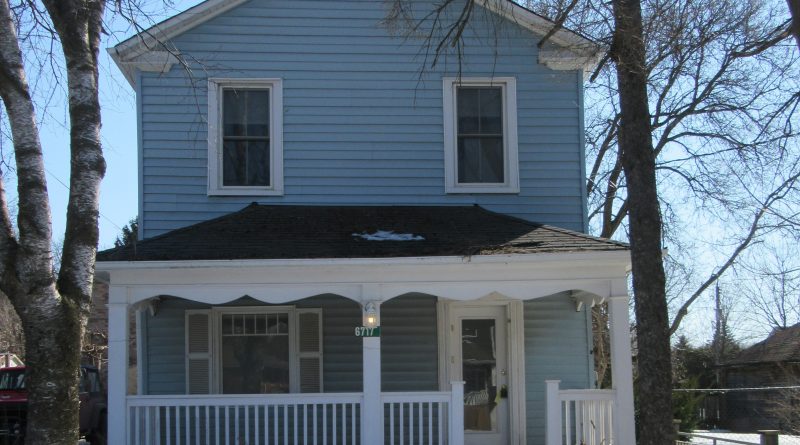 The residence at 6717 Main St. has many of the characteristics of the 1850s buildings in the area.

The east end of the Village of Stouffville was made up of simple frame homes for the working class in the local industries.

Ludwig Kribs was the minister for the Congregational Church in 1845. He was responsible for the frame church being built on the south side of Main St. He was a competent carpenter and likely had a hand in building most of the early structures here in the east end.

The home is tied to many recollections of a bake shop. What is amazing is the history has retained most of the names. Henry Pennock was a baker, in the Assessment rolls of the Village in 1877. He was the tenant of Eugene J. Freel who was the son of Dr. James G. Freel. The property was valued at $200 for a 1/16 of an acre.

A few years later in 1881, a William Green was listed in the census as baker, also his son Reginald was a baker at age 12.

A bake shop conducted by Moses Hill and a man named Brandon dated back to 1887.

Older folks might remember Milller’s Bakery. Jimmy Miller did the delivering for his father when they were in business here at the turn of the century.

Next came a house and bakeshop with Freel’s Hall on the second floor. Dr. James Freel lived in a cottage next to the bakeshop, and the building was later moved to Mill St. Pastor Ludwig Kribbs lived in a house at the corner of Cemetery Lane (6711 Main St.), and it was later given to his son Peter. The house remained in the family for sixty years.

It was also recorded that the first council meeting for the Village of Stouffville on January 15th, 1877 was held in Freel’s Hall. The motion was made and second that they accept the offer for the free use of the hall for a year from Dr. S. L. Freel. The motion was carried.

Some believe that John Monkhouse’s shop was possibly Freel’s Hall. It was moved over the creek after it was no longer being used in the east end.

The significance of this historic place is well worthy of designation. It is a representative building in a form that connects us to a very early economic and social time in the history of Stouffville. It would be a sad day if it could not be saved as the scoring of this importance is very high.