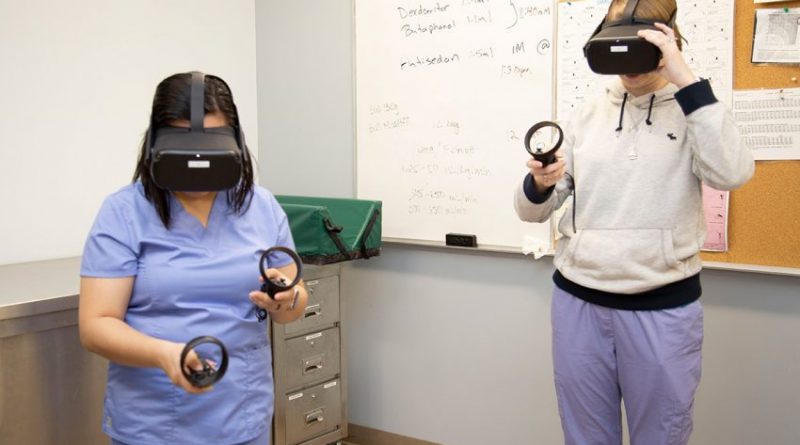 Seneca gets a dose of virtual reality as experiential learning helps educate students.

Trixia Kay Santos knows what it is like to have dementia. The third-year nursing student at King Campus has stumbled around in a marketplace and lost her way. She has felt the overwhelming fear, confusion and panic. These experiences are real even if it is a walk through dementia in virtual reality (VR).

“We have textbooks and simulation labs in our program, but putting on the VR goggles and experiencing something first-hand from someone else’s perspective provides an in-depth understanding of what we are studying. The VR experience nurtures empathy,” Santos said.

VR experiences such as Santos’s — being placed in the middle of pre-recorded scenarios faced by dementia patients — are successfully being integrated into many programs at Seneca. And the enthusiastic response from students does not surprise Prof. Tania Killian, who teaches in the School of Nursing and the Workplace Safety & Prevention diploma program. Prof. Tania Killian is King Campus’s newest experiential learning facilitator.

“That’s the way students are learning now,” she said. “They are adept at technology and don’t pick up books as easily as they might an iPad. Most of them already use VR for entertainment and we are tapping into that to enhance their learning experience.”

While the importance of simulation labs in programs like nursing is well established, Ms. Killian pushed the boundaries of experiential learning when she won $10,000 from Seneca’s King Township Women of Influence Giving Circle for her proposal to equip Seneca students with VR headsets for enhanced learning. From there, Ms. Killian bought two 360-degree cameras and nine VR headsets. She has since filmed several VR experiences that are more relevant to the programs at King than the pre-made ones available commercially.

“We’re trying to integrate virtual reality into all of our programs at King and our goal is to set up a VR hub for that,” she said. “Employers want students with experience, but simulation labs and field visits allow only a limited experience to a limited number of students. However, once filmed on VR, an experience can be accessed limitlessly and by any number of students. The students can place themselves in the same environment repeatedly till they achieve the skill level they require.”

VR experiential learning is also useful in helping students deal with situations they may find challenging in their profession, such as deep diving in the Underwater Skills certificate program where students may be confined to a narrow hyperbaric chamber to avoid decompression sickness.

“Some students may panic once in the chamber so we have made a 360 video of it,” Killian said. “They can now explore the hyperbaric chamber on VR headsets and get over their fears. We have also filmed the diving pool at King to have students experience it before they dive in.”

Another program that has benefited from the VR project at King is the Veterinary Technician diploma program. In addition to VR experiences for anatomy courses, also in the works is filming for one-time experiences such as sheep giving birth, called lambing.

“Currently, we can have only a small number of students experience actual lambing because we can’t crowd the sheep,” Prof. Kirsti Clarida said. “But once we have it on VR, all students would be able to explore a professional scenario before they encounter it in real life.”

As well, they can revisit a live event that has already happened.

Students Elaine Kwong and Leanne Walton recently stood in an empty X-ray room and learned about the sheep shearing project between the Veterinary Technician and Fashion Arts programs, an event that took place last spring. Wearing VR headsets, the two were submersed in the virtual world of the King Campus barn and felt the bleating sheep milling around them while they watched a master shearer at work.

“It’s awesome to be transported somewhere entirely different while you are standing right here in this room,” Walton said. “It’s like we were there in the barn and we saw everything with our own eyes.”