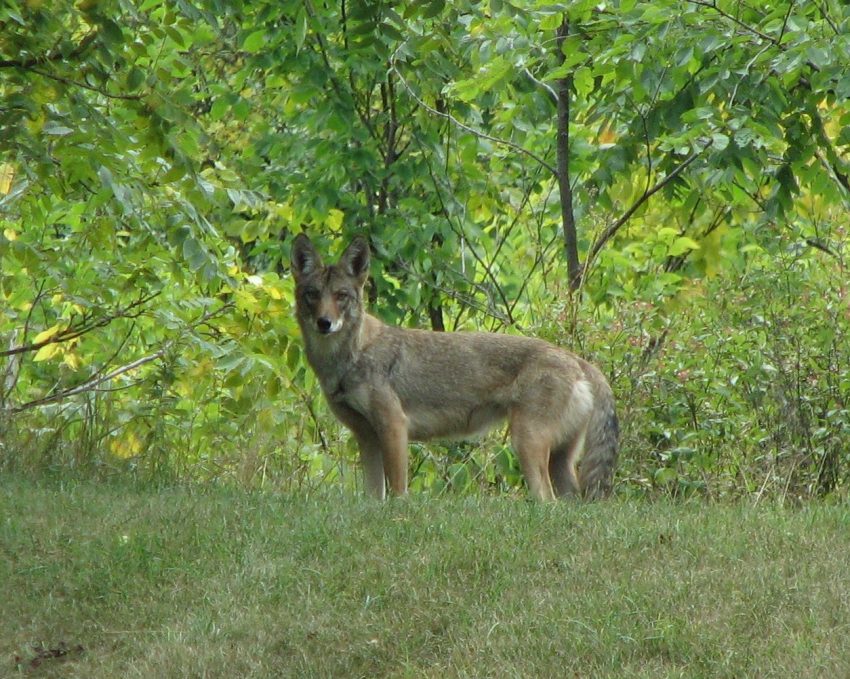 Over the past few months, municipal officials have received an increased number of calls from residents about coyote sightings. Coyote-human interaction is becoming more common in communities as urban sprawl removes habitats where coyotes previously lived and people intentionally or unintentionally provide them with food sources. It is therefore important that residents understand coyote habitat, their behavior, what to do if a coyote is encountered, keeping your pets safe and how to deter coyotes from coming near homes.

The coyote is a small relative of the wolf, averaging 30 to 40 pounds in weight, though may appear larger due to the thickness of their coats. Coyotes are very adaptable and can thrive in any forested area. They are known to live in natural valley lands, ravines, and urban parklands.

Coyotes are most active at dusk, dawn and throughout the night. They do not hibernate and are therefore active year-round. Generally, they are shy, cautious and non-confrontational. Coyotes may damage gardens, search through garbage, and possibly prey on cats and dogs for food or to eliminate a perceived threat to their territory or young.

It should also be noted, however, that coyotes benefit urban areas by helping to control the population of small mammals such as mice and rabbits. For this reason, “co-existing with coyotes in an urban environment is not only good for wildlife but great for our cities as well,” says Adrian Nelson, Association for the Protection of Fur-Bearing Animals (Fur-Bearers) wildlife conflict manager. Fur-Bearers and other organizations such as Coyote Watch Canada work to educate the public about the need to co-exist with wildlife such as coyotes.

It is important to note that attacks by coyotes on people are very rare. There are only a few documented cases in the entire province, far more uncommon compared to dog attacks on people. In all known cases of coyote interactions with people, the coyote had lost its fear of humans because people were feeding the animals.

In case of a coyote sighting or encounter, you and your children are advised to keep at a distance, remain calm and do not approach, touch or feed the animal – most likely the coyote will move on. If the coyote approaches, be assertive – stand tall, wave your hands, and make a lot of noise. Back away from the animal and throw items toward (not at) the coyote. Do not turn your back or run from a coyote. Avoid walking alone and carry a whistle or personal alarm device, especially in wooded areas. Also, carry a flashlight at night.

To deter coyotes from coming onto your property store your garbage or compost in secure containers and keep your garage or shed doors closed at all times. Do not leave pet food outside. Monitor bird feeders, overflowing feeders that attract small mammals such as mice and chipmunks, in turn, attract coyotes that prey on them. Maintain solid fence enclosures around your yard and install motion-activated lights.

By taking precautionary measures and being mindful of our behavior, we can learn to co-exist peacefully with wildlife such as coyotes. Coyote Watch Canada and Fur-Bearers work to spread the message that much wildlife conflict occurs in urban areas due to changes in the environment, often because of human activity. Likewise, ending that conflict and co-existence, rests with us.

For more information, contact the Ministry of Natural Resources and Forestry at 1-800-667-1950 or visit www.mnr.gov.on.ca. You may also report concerns to your local animal services department.  If a coyote is posing an immediate threat or danger, call 911.