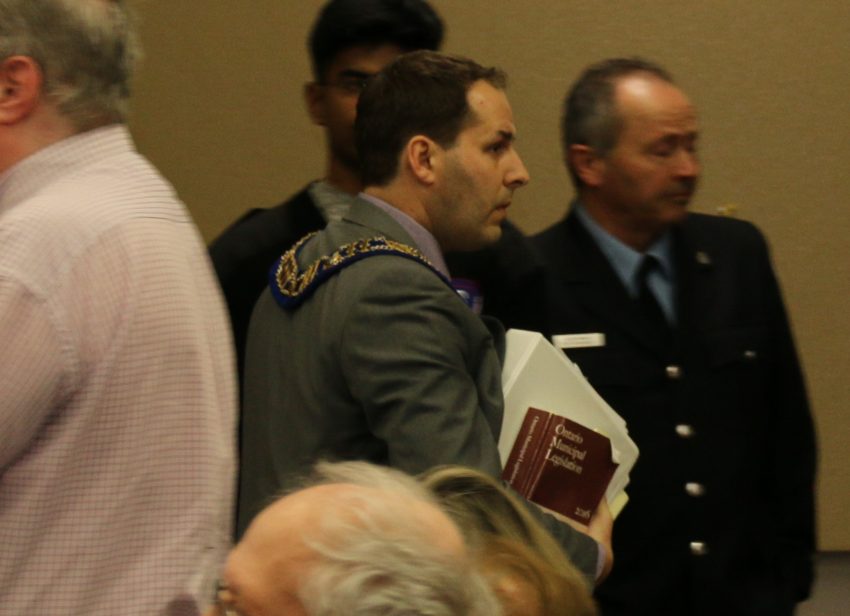 Mayor Justin Altmann and council were met with a full house, and then some, in chambers March 6 as reports regarding the mayor’s fund spending and three others concerning allegations against the mayor in the form of an integrity commissioner’s report were brought forward for public scrutiny.

The latest commissioner’s report, published March 2, made recommendations to council to further censure the mayor for not abiding by the recommendations in her first report that found him to have committed actions that amounted to workplace harassment. Then, the mayor was then stripped of the use of the chain of office except for council authorized business and docked three months salary.  An apology was also demanded but, as reported in a January edition of the Review, he refused.

Commissioner Suzanne Craig, whose report was the source of much town discussion, was front and centre at the evening’s events as she vigorously defended the report contents and her motives – both of which had been questioned by the mayor and, quite vocally, by his supporters.

Despite a raucous crowd of mayoral supporters in attendance, Craig was defiant saying she was not only upholding the rules of council’s own code of conduct, but also provincial statutes. She also noted the mayor was found to have contravened not only workplace harassment guidelines but also rules governing public disclosure of events that council is obligated to keep confidential. She also took time to explain her investigative mandate and the procedures involved with her report. However, minds seemed to be made up on all sides.

At the outset, Altmann requested a delay in proceedings to consult with a lawyer. That motion to delay was denied by council. Altmann, citing pecuniary interest in the discussion, excused himself but not before relaying a forceful defence of his position in which he alleged that he was in fact a victim of circumstance and not the perpetrator.

Ward 6 Councillor Rob Hargrave was the only council member to air reservations about the commissioner’s report, noting the most current recommendations were punitive and not corrective.  He also voiced his displeasure at having to make decisions about the mayor’s future when reports that form the basis of the commissioner’s report were not being made public or available to council members. That includes the result of a threat assessment on the mayor.

Craig did note council could endorse, refuse or change her recommendations. Council, however, decided to follow her recommendations and strip the mayor of six months salary, administer an official reprimand and, more seriously, to take away his access card to the mayor’s office among other measures. They entail only being allowed on town property for the purpose of attending specific meetings or to pick up mail or pay bills. Only Hargrave voted in opposition.

The nature of the penalties recall the Rob Ford era, when the Toronto mayor was stripped of control of his office. Here too, questions are being raised about whether Altmann can be effective as the mayor given the measures taken by council.

One thought on “Council votes to censure mayor”