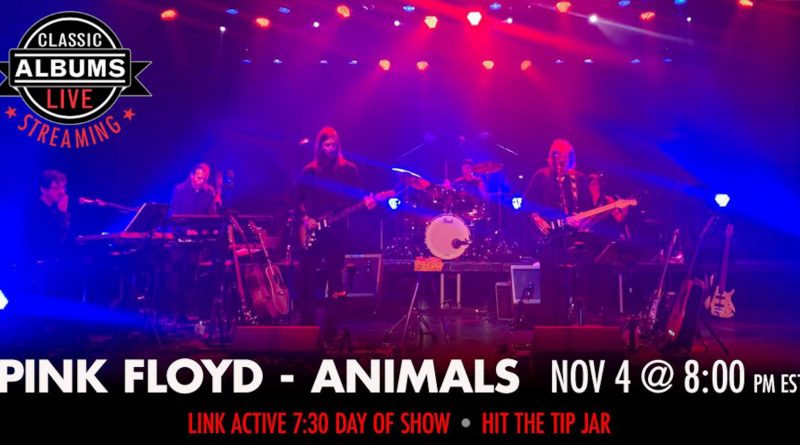 Pink Floyd did for progressive rock what the Beatles did for rock n’ roll. They somehow both elevated it and made it appealing to a mass audience.

Pink Floyd made some of the best albums of the twentieth century. They redefined popular music in the 1970s. More importantly, however, they made popular music that can’t be dismissed as anything but great art.

Their 1977 album, Animals is a perfect example of this. Loosely based on George Orwell’s classic novel Animal Farm, the album uses this as an allegory for the socio-economic conditions of the times. Sounds dreadful, right? Except it isn’t. It’s a blisteringly expressive rock classic that fans love to this day.

Pink Floyd performed its last concert on July 2nd, 2005 as part of Live 8, and was broadcast around the world. In 2008, founding member Rick Wright passed away and made experiencing a Pink Floyd concert part of history forever.

This November 4th, Classic Albums Live wants to recreate at least a piece of this incredible legacy and make it available for all to experience.

Working with, among others, The Flato Markham Theatre Classic Albums Live wants to keep the live music experience throughout the pandemic via live stream performances. The Album Animals hits the stage and the stream next.

For those who may not have caught their shows in past years, Classic Albums Live is exactly what it sounds like. It’s an all-star group of musicians that perform some of the best rock n’ roll music ever recorded note for note, cut for cut, live on stage.

“We are not a tribute band and we don’t dress up in costumes,” explains Classic Albums Live’s founder, Craig Martin. “We care about musical perfection.”

This passion for perfection will be on display for all to see on November 4th.

As a bonus, Markham viewers should take note that homegrown musician Jenn Kee will be in the band playing guitar and singing.