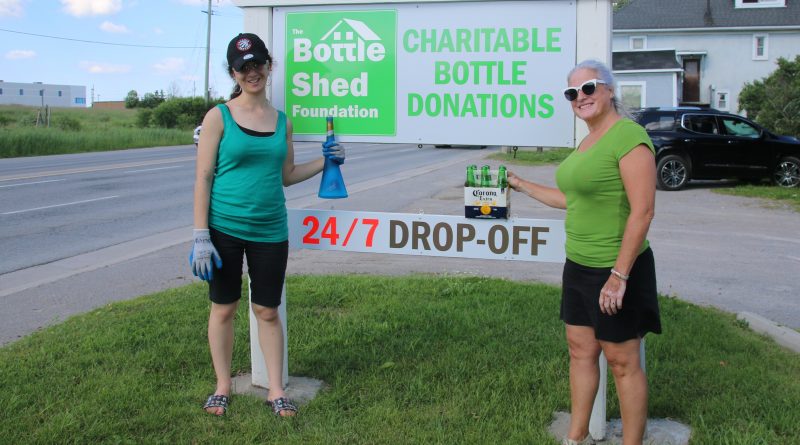 Along a fast-travelled section of Stouffville Rd., wedged inconspicuously between Highway 404 and Woodbine Ave, is a unique operation that gets little attention from the commuters whizzing by.

Supported by the Beer Store and staffed two days a week by people with intellectual disabilities intrepid volunteer and community activist Shaen Armstrong, the Bottle Shed Foundation – complete with a new sign – is ready and willing to take your refundable bottles and cans and put the money to a good cause.

Originally the brainchild of Armstrong and Coach House in Ballantrae owner Bill Perrie, the Bottle Shed is a non-profit enterprise run by Armstrong and overseen by a board of four people. For the last five years, it has provided a few hours of work experience and social time every week for young workers who would otherwise be in expensive care programs.

People can drop wine, beer liquor and other refundable containers to the depot during working hours on Monday 1-4 p.m. and Wednesday 4-6 p.m. or people can drop bottles off in off-hours in the storage shed beside the building. The bottles are sorted and rinsed according to Beer Store policies and the money received goes partly to the workers and partly to other charities in town – a favourite being the Able Network, a service for adults with intellectual disabilities that runs out of Latcham Hall.

The Able Network also accepts refundable bottles and cans on behalf of the bottle shed at Latcham Hall Monday to Thursday from 11am to 1pm and bring them to the bottle shed for processing.

The project is a labour of love for Armstrong, who has donated an increasing amount of time to this project and others since her retirement. She marvels at the lack of support that is available for older people with disabilities.

“Once they hit 21 (years of age), they are out of high school and have nowhere to go to,” Armstrong says, noting that families are then forced to take up the slack in providing activities and programs that government programs once paid for.

Armstrong acknowledges that the hours of work provided to her helpers are limited, but they are a part of the week they look forward to. It’s not all work either. When there is a lull in the number of bottles and cans to process, pieces of art are often created from some of the more unique donations.

The Beer Store’s participation in the endeavour was supported by Ted Moroz, the president of the Beer Store and also an original member of the board. It is just one of the community initiatives that the much-maligned organization –  owned collectively by the larger beer companies – undertakes, but does not promote.

That support includes allowing the Bottle Shed workers to collect refundables on its behalf at the new Stouffville Beer Store at 5779 Main St. the weekend of August 9-11. Any bottles that weekend can be donated to the Bottle Shed foundation, but Armstrong and helpers will be on site on Saturday, August 10. The money from that weekend will go entirely back to Bottle Shed activities and supported charities. But the money received from the collection is only a bonus notes Armstrong. “We don’t really want money; we want these kids to have work,” she says stressing the social value the project offers.