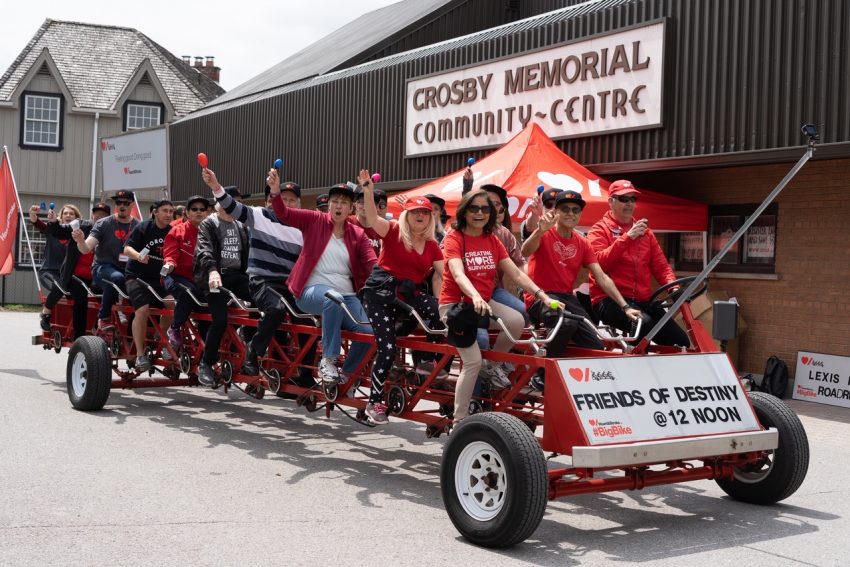 There are many reasons to participate in the annual Heart and Stroke Big Bike ride. For some riders, it’s about making a difference, raising awareness and saving lives. After all, almost everyone knows someone who has been affected, directly or indirectly, by heart or stroke.

But it’s also about fun, competition between teams, health, fitness, raising money for research, team building within organizations and for some new businesses, it’s a way of showing the community it cares.

“It’s team-building,” said Lisa Charlton, manager of community fundraising for the Heart and Stroke Foundation. “The majority of our campaigns and fundraisers raise awareness about certain aspects of heart and stroke whether it is our F.A.S.T. campaign or something along those lines but we also raise funds for research. All of our money goes to research.”

Charlton has been with Heart and Stroke for five-and-one-half years and has been participating in Big Bike in every year, filling in gaps on teams wherever she is needed.

With a 20 year career in fundraising, she had a personal reason for making the move to Heart and Stroke. Both her grandmother and grandfather have had strokes.

“At the time it was my grandfather that had the stroke. He wasn’t diagnosed in time to get TPA (a “Clot Buster” drug),” she said. “It had a very dramatic effect on my family – the caregiving aspect – my grandmother having to take care of him until she had her stroke.

“I’ve seen the devastating effects that this has had, the toll that it takes and I really want to work to eliminate that from other people’s lives, to raise awareness.”

Millions of dollars have been raised over the past 25 years. It is Heart and Stroke’s biggest corporate fundraiser. This year’s goal is close to $200,000 between the communities of Stouffville, Markham, and Unionville.

An online platform is set up by Heart and Stroke where each team has its own page. Teams receive a tool kit of fundraising ideas. There are prizes for certain levels raised by teams and individuals.

It’s a competitive, empowering team-building experience. Many companies such as Metro and Longos have more than one team competing against each other. Some like Weight Watchers compete with themselves across different locations.

“Personally I think it’s one of our most exciting events,” said Charlton. “There’s something to be said about seeing this massive bike riding around in your neighbourhood and it’s great fun. Once you get on it there’s a lot of spirit, cheering and everybody has their noisemakers. It’s just a spectacle. It’s a really great experience to get involved with.

Ride days take place in Stouffville May 13 at Longos on Main street; Unionville on May 28 and June 11 at Crosby Memorial Arena; and Markham in Commerce Valley May 12. The Markham event has two bikes riding in tandem this year. Teams of 30 people per bike are scheduled throughout the day at one-hour intervals.

Photo: The Friends of Destiny Big Bike team has members from many different organizations in Markham and Unionville.