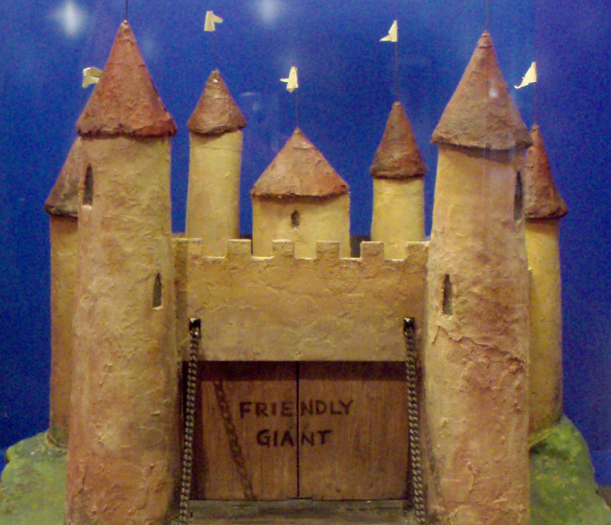 Going back a generation or two, you’d know the Friendly Giant as a staple of children’s television shows.
The impossibly tiny props that captured the hearts of Canadian youngsters were the making of Ivan Harris.
At the beginning of every episode of the Friendly Giant, viewers were taken on a scenic tour through rambling greens and into Friendly’s village of perfect little houses, churches, barns, and animals. Then, Friendly would lower the drawbridge and open the doors into his fairytale castle.
Every painstaking detail—from the blades on a windmill to a little car parked in a garage—was crafted by Harris, as the CBC show’s special effects master. And every episode, for the first two years of the show, he was even in charge of hoisting the moon over the castle and making sure the cow always jumped over the moon.
“I had it down pat. My mother couldn’t believe I was paid to do that,” says Harris.
The Friendly Giant first began in 1953 as a radio program in Wisconsin, and soon moved to television. CBC children’s programming executives saw the program and invited the show’s creator and star, Bob Homme, to Canada in 1958.
Harris was working in the special effects department at CBC for various shows at the time, and was recruited after a chance encounter with Homme.
“This big burly chap came into the studios with an enormous strange looking thing with points on it. It was a castle which he had brought in the backseat of his car all the way from Wisconsin,” says Harris, who is now a director on the Whistle FM board in Stouffville.
The castle had sustained some wear and tear from the road trip. Harris was appointed to do renovations on the chipped plaster and the broken turrets. His excellent work earned him a permanent spot on the show.
His eye for detail and immeasurable patience created the wee chairs that Friendly gathered around a fireplace every episode, and even the little candelabras that sat on the mantle that lit up with Friendly’s touch.
“The wheat grain light bulbs were great. I was quite proud of that system,” says Harris.
And when Harris needed a little help, he enlisted his mother, Mary, who sewed Rusty the Rooster’s pouch when it became a little worn.
As the drawbridge closed on his last day on the show in late 1959, the crew arranged a surprise for Harris. The Ella Fitzgerald song Paper Moon floated over the credits at the end of his last episode.
“Say it’s only a paper moon sailing over a cardboard sea. But it wouldn’t be make believe if you believed in me,” sings Harris. “It nearly brought me to tears.”

The special effects artist went on to other posts within the CBC afterward. “It was a great kick-off to my career.”
Throughout his 41 years with the broadcaster he also helped collect and preserve historical artefacts, and was the driving force behind the CBC museum that currently resides in the building’s atrium in Toronto. In 1994, a portion of the museum was dubbed the Ivan Harris Gallery. After retiring, he dedicated his time as a volunteer curator.
In 2002 he helped take The Friendly Giant set on the road in the CBC/Radio-Canada 50th Anniversary VIA Rail train that hauled a museum. The travelling open house containing many relics from Canada’s broadcasting history visited 21 cities across the country.
“It was wonderful, really,” recalls Harris. “We even took the tickle trunk.”