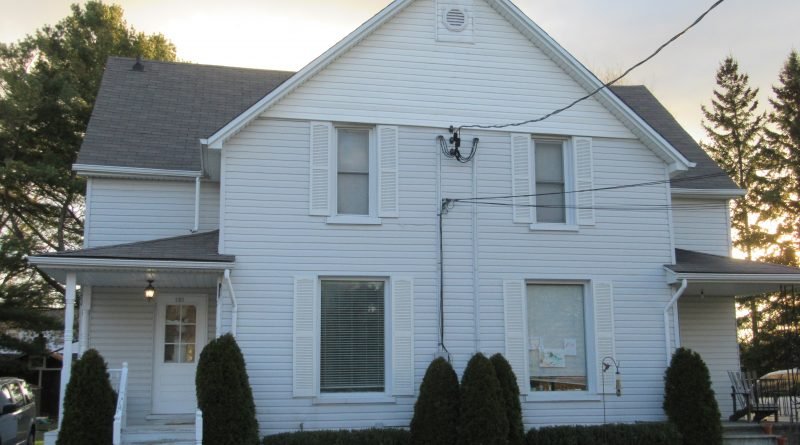 The very end of Albert St. is in the northern portion of the area’s heritage neighbourhood.

Harold Ave. was becoming more frequently used as a road out to the Ninth Line concession. Development was selling off lots and registering plans for a combination of other building projects.

Albert St. was an older street starting from Main St. travelling north. Each plan of development included an extension of roads. This part of Albert St. was left as “Park Lot 5.” Joseph Edgar purchased a large part of land for lots on Nov. 2, 1894, for a cost of $400. Years later Edgar sold Robert Stewart Lot 1 for $160 for the lot as described, on Feb. 17, 1902.

Stewart had come from Scotland at the age of 27 in 1879. He was employed at the Duncan farm on the 5th Concession of Markham. Here he met and married Elizabeth Duncan. Once the couple were married they went to live in Toronto where he already had work. They moved back to the Village in 1899. Stewart conducted a butchering business. His first shop was in a building where the Button Law office is now. The old building belonged to a Thomas McDougall.

Stewart was living in 1901 with his wife Elizabeth, his son Alexander Garnet, and his mother-in-law Jane. He is listed as a gardener in the census with land planted near his home. Two years later, Jane passed away and was buried in Melville Cemetery. Alexander who went to school here in town at Stouffville Continuation school which is now Summitview went on to become a teacher for many years at Central Technical School in Toronto.

It was not long after that Stewart moved from the Ninth Line in Whitchurch to his new home in town. Two years later, Stewart bought the property south of the house, another lot for $180 in 1906. On Dec. 20, 1910, he took out a mortgage for $900 from David McKendrick likely to purchase the balance of surrounding lands. He paid it off on June 20, 1928.

Early potatoes from local gardens were to be expected on the farmers’ market usually in mid-June. It used to be a race between Robert McKinnon and Robert Stewart as to who would be downtown with the new “murphy’s” first. Stewart at age 89 years may be a drag, but planting must go on said the determined Scotchman and we admire him for his determination.

Stewart was a resident of Stouffville and the immediate locality for 59 years until he died on December 13, 1944, in his 93rd year. He was a hard-working rugged individual and a good citizen.

Photo: 130 Albert St. was home for many decades for Robert Stewart.