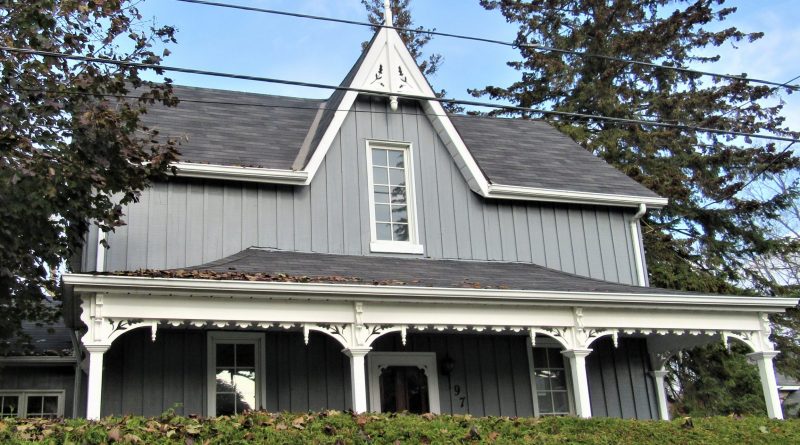 Back in the days when a family stayed for more than a few years in a house, it would be common for many generations to live in the same location and same building.

This rich tradition brings value to the built form throughout the community. Families would have many special gatherings and functions to celebrate together. This would strengthen the family unit and also in turn strengthen the community. The house and its residents over the years is an example of these traditions.

The property was part of a survey done by C. G. Hanning. It was Plan 1073 dated Oct. 23, 1890, and completed for R. J. Daley. A few months later it was officially registered. This is when the lot fabric was created and the streets named. Lot 24 and 25 became the property of Samuel George who owned the lumber yard on Edward St.

Samuel purchased the lots for $200 on July 15, 1891. It is thought that when he took a mortgage for $400 at the same time, that the extra cost was materials. The timing was excellent to build.

According to the April 1891 census, Henry Woodburn had been living with his second wife Elizabeth Stouffer in the community in a 1½-story wood home with five rooms. Henry purchased lot 24/25 from his son-in-law Samuel for $500 on Nov. 3, 1903.

Henry later became very ill and then sold the property to his daughter Sarah Ann and her husband William T. Gower. The cost was $750 on May 27, 1915. Henry passed away the next year on Feb. 14, 1916 and was later laid to rest in the Stouffville Village Cemetery.

The final family connection was Korah Dorian Woodburn who was the son of Sarah Ann. He ended up selling the property for 5000 to Donald R. Chadwick and John W. Smits, of the Stouffville Machine and Tool Works. It became an income property for eight months.

The main part of the home was designed as an Ontario vernacular and had a simple gable roof with a center tall peak. The window locations are similar. The front porch has been upgraded to include some quaint gingerbread in an older style. The wheat sheaf was used elsewhere in town and was applied to this older home. It reminds us of the agricultural roots of this farming community.

This home at 97 Rose Ave. is a fine example of the care the owners have maintained for the past few years and the investment to have a good street and curb appeal.

Photo: 97 Rose Ave. was a great home to many generations of the same family.

Making the holidays a little brighter for everyone in Whitchurch-Stouffville, Canada’s own, GRIPBlock has built a Lego-like mini city for