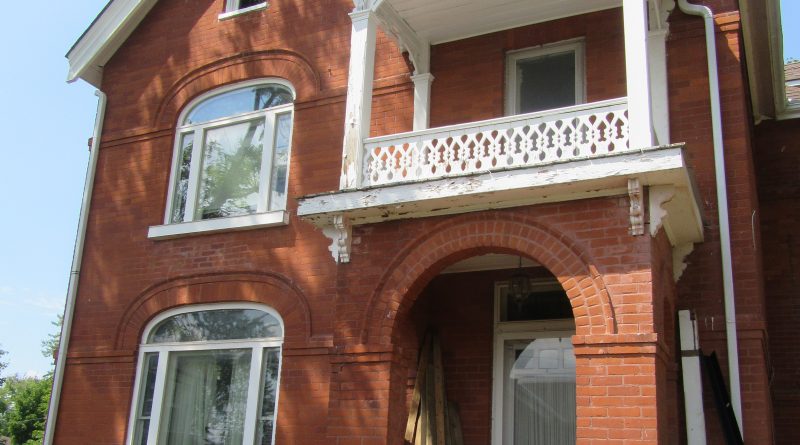 The massive red brick, two-and-a-half-storey structure was built in 1898. It was for John Bray Jr., a tailor and businessman who had come from the Uxbridge area. The new home was located at the corner of Stouffer and Main St. He had a shop in the Bray Block on Main St. which was on the corner of Church St. S. and Main St.

The Romanesque style with the roman arches and the brick corbelling are good indicators that the common builder in the village, Nathan Forsyth, built this home. The stain glass transoms are a special mark of his as well. The woodwork has the design of wheat sheaves this reflects the agricultural theme for this community. It is amazing that the original decorative trim pieces are still intact and in good shape. The pride in this home over the years had been maintained.

They show that Mr. Bray was sparing no expense to have this larger home on Main St. He had purchased the lots 49 and 50 as one parcel for $300. Mr. Bray unfortunately died September 14, 1900.

It sold in 1901 for $2,000 to John Forsyth. During Mr. Forsyth’s ownership, the spacious lawn was the scene of several garden parties sponsored by the Anglican Church.

Dr. George H. Patterson, a dentist who conducted teeth extractions there for a time was the owner from April 1928 until Oct. 1934. Dr. Patterson had moved out in 1933 relocating to Bradford, then the house sat empty for one year.

It has been a landmark at the east end of the village for more than a century. The home once boasted of a glass observatory on the roof that made it the only one of its kind in town. The solarium was removed back in the 1930s. The windows were reused for a small porch addition.

Mr. T. H. (Harry) Paisley purchased the grand home for a price of $2,750 in 1934. He raised a family of seven from this abode. Mr. Paisley was one of the first livestock dealers in the area. He also established one of the first livestock transporting business in Stouffville. He continued on as a “drover” until his retirement in 1966. He was active in a number of local organizations. He was a member of the Christian Memorial Church across the street from his residence. He was part of the Richardson Masonic Lodge which had a private service for him in his honour. He was president of Markham Fair in 1958. His son Bert was president of the fair in 1971. On his retirement, he sold the massive structure to a city man for $15,500 in 1966.

The street view has changed drastically since the good old days when large lawns were in style. The property was severed into pieces to create other building lots. There are now three additional homes surrounding the hidden gem from view off Main St.  Even the address has changed it was once 6548 Main St. and now has become 188 Stouffer.