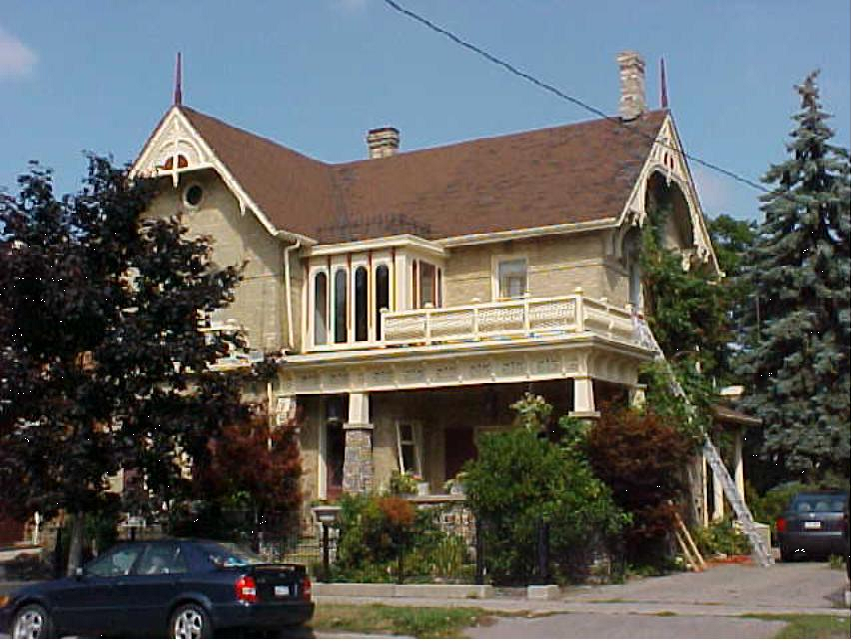 Silas Beebe was a famous axe maker in Stouffville. He was an artisan of outstanding ability, which trait seemed to have been imbibed to a great degree by his oldest son Byron. Silas made axes and edge tools in a shop in the east end of town in 1855. He shared the space with Hugh Casler, a fellow blacksmith.

His son Bryon E. Beebe was born 1851 and also became a blacksmith, an industry and trade very important to life in the early days of Stouffville.

Once B.E. Beebe was married he settled in Lemonville for a time. It was here that Byron began his music forte with the Lemonville Orchestra. He was later the drummer with the Stouffville Band when he resettled in Stouffville.

His home, at what is now 6114 Main St., had originally been built for Joseph and John Park owners of the sash and door factory (now known as Schell’s Home Hardware) c. 1890.

Mrs. Lorinda (Lount) Beebe, the wife of Bryon, bought the home on Main St. in 1893. This home remained in the family for 50 years (1893 – 1943). Mrs. B.E. Beebe introduced the community to a peach tree which stood in the rear yard of her premises on Main St. It was reported in the local paper that “this one tree produced six baskets or more of as fine a sample as ever grew out of doors. She was able to raise this luscious fruit to proper maturity like no other. The tree was five years old (1932) and had grown from a pit.”

Mr. Beebe lived here till his death in 1927. His wife Lorinda stayed till her passing in 1934. The home was then put up for sale. It was described as having, “All conveniences, warm and comfortable in coldest weather. Open grate fire place in living room. Nice garden. Must be seen to be appreciated. Reduced in price.”

Next to live here were his daughter Myrtle (Beebe) and her husband Mr.  James Monk. Mr. Monk moved to Lincolnville in 1938 to retire and try his hand at gardening.  Principle L. C. Murphy then rented the Beebe home in 1939 moving in about the middle of July. Mr. and Mrs. H. J. Love of Toronto had rented next in 1942. They had fallen in love with the place from its general attractiveness. Mr. Love was appointed to the Library board.

Dr. E.S. Barker, a dentist was the next to purchase the home, from Mrs. James Monk. Prior to its purchase Dr. Barker and his wife were living across the street. They moved in 1944 and still had the home in 1953 when it featured in the local paper as a historic home.

The use of “white” brick construction was similar in the neighbourhood. The Victorian style is much like the house next door to the east. The fancy gingerbread in the gable peaks is a highlight. The house has two verandahs one on the ground floor and one on the upper floor. The porch with the stone work was likely the handwork of Jacob Jennings built in the 1920’s. The rear porch reflects how the main porch may have once looked with the full columns. The circular upper windows stand out as special. The brick banding can be seen on the main floor and upper levels. The circular window has a brick accent like a compass.

One thought on “6114 Main St. has been home to many town notables over the years”