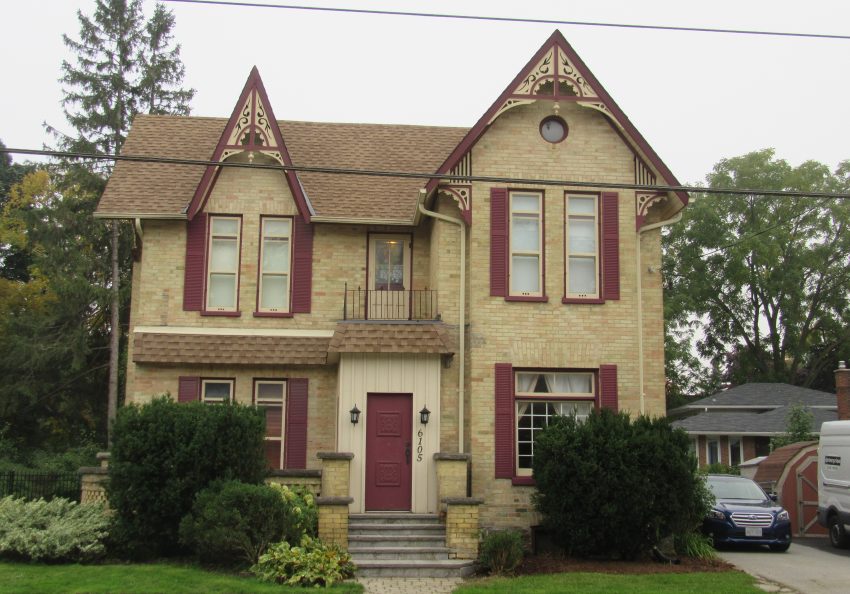 The yellow-brick Victorian home is part of Main St. West. It was built in 1893.

This grand home was once the home of David Latchford, who operated a carriage shop on the eastern portion of the land. He was living in Peterborough 1871 at the age of 16 and was listed as a blacksmith. He purchased a large piece of property on Main St. from James G. Clarke.

The shop property was part of Plan 321 being lots 1 and 2 on the corner. They were slightly larger being 66 feet frontage and 165 feet deep. Sophia (Miller) Latchford had inherited the land from her father Elijah, when he died in 1887. Sophia, a native of Ballantrae, came to town in 1874, when she was 14 years old. She lived at her home till the age of 82, in 1942.

This house is very different, as most in the area are red brick. The house has had very little changes made to it over the years. The front porch was once complete with columns, gingerbread and an upper railing for the walkout. The curved brick porch is evidence of this.

The steep roof lines show off the gables with kingposts and original gingerbread. The grouping of windows is in slender pairs of one-over-one glass and are dressed up with shutters in the contrast heritage colour.

David W. Latchford passed away at his residence on Dec. 27, 1916. He was 62 years of age and laid to rest at Stouffville, in the family plot.

Mr. and Mrs. Earl Hoover rented the former Latchford house in the spring of 1946. By fall of the same year, Mr. and Mrs. Bert Batt were renting the home. They had moved from the farm in Markham.

Mrs. John Urquhart moved back to the village from Ayr and spent her last years here.

After more than 80 years, the home was sold to Mr. Bruce Stapley, who has many memories of the house. Stapley purchased the home in Oct. 3, 1977, and had some major renovations completed during his stay. He finally sold it, on May 15, 1985, to Bruce Halverson.